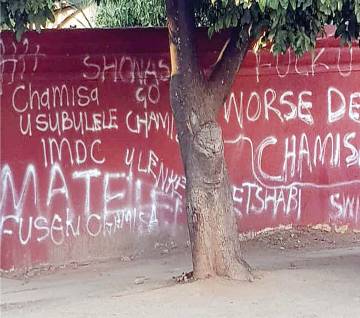 MDC president Nelson Chamisa reportedly received a hostile reception by disgruntled MDC officials in Bulawayo who were not happy over his perceived tribalism and dictatorial tendencies, a report claims.

Chamisa was in Bulawayo for the party’s provincial caucus where nominees for the party’s executives were canvassing for support ahead of the May 24-26 electoral Congress.

According to a Chronicle report, graffiti attacking Chamisa was allegedly written between midnight and early Monday morning. The report reads:

The graffiti was reportedly removed by the party before Chamisa’s arrival.

However, MDC party spokesperson, Jacob Mafume dined that there was any graffiti at the party’s offices.

Bulawayo provincial chairperson Switcher Chirowodza said that reports of graffiti at the Gertrude Mthombeni House were fictitious. He said:

I have heard about photoshop pictures on the walls of Gertrude Mthombeni House (The party’s provincial offices). Your source should desist from disseminating fiction.