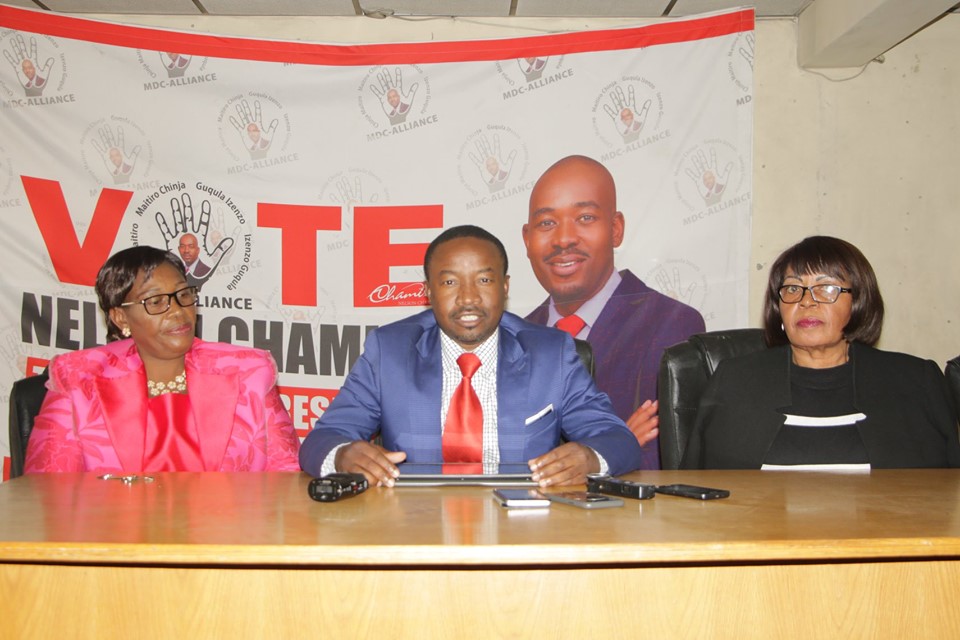 Following the recent High Court ruling that nullified Chamisa’s presidency in the MDC, the NewsDay conducted an interview with Jacob Mafume, the MDC spokesperson.  He indicated that the party was proceeding with plans to conduct the Congress. He also said that the selection of party leaders was a preserve of party members. Below are excerpts of the interview between Blessed Mhlanga (ND) and Jacob Mafume (JM).

ND: The MDC has indicated that it is going ahead with its congress despite a High Court judgment which has ordered an extraordinary congress instead, what are your thoughts?

JM: Well, first of all, we are pushing ahead with Congress. The party is still there, it is still intact. The leadership is still intact, the judgment is one of those things that comes out of the courts, but we have legal options from our lawyers that indicate how we can proceed.

So, we cannot stop a process that had begun, a process that had over 500 000 people, a process that had 1 958 wards, 210 constituencies or districts and 13 provincial congresses. That process has to continue and reach its logical conclusion. What we do is, we look at the situation, if it needs to be appealed, we will do so depending on the advice from our lawyers.

It cannot be determined by the courts, it cannot be determined by anyone else who is outside the ambit of the membership. The world over, and time and time again, this is a stated legal principle which has been stated even here in Zimbabwe by Constitutional Court (ConCourt) that it is the preserve of the members to select its leadership and that is what the party is doing.

ND: When you say the ConCourt, what is the specific case.

JM: There is a case of Bhasikiti and others versus Zanu PF and Robert Mugabe, there is the Madzimure case versus MDC. There are a number of judgments this court has issued and their clear stated position is that … if you are unhappy with a particular party, being a voluntary member, you get out and you form your own.

ND: Don’t you risk the tag of being a rogue political party that doesn’t respect the rule of law?

JM: The rule of law is that the members of a political party choose its own leaders.

ND: I mean you are continuing with congress when the rule of law says go for an extraordinary congress?

ND: In the statement you issued, you alleged Zanu PF had a hand in this, do you have any evidence or you are just casting aspersions.

JM: What we referred to were the machinations of Zanu PF to deal with MDC. The evidence of the machinations of Zanu PF are all too clear: The tweets by (Information deputy minister) Energy Mutodi, the statements by various leaders of Zanu PF that are determined to deal with the leadership of the MDC, (Victor) Matemadanda saying they would prefer a particular leader. Douglas Mahiya has said they would prefer a leadership that is other than our president Nelson Chamisa, you have heard them time and time again trying to change the leadership of the MDC right up to the point that they even proposed that they needed to change the Constitution so that the presidency of the country can only be contested by a person who is 52 years old and above. They have said the opposition must develop a character that they (as Zanu PF) have defined; they have clearly made their preferences known … and they have indicated that they don’t want Chamisa to be the MDC president. So, those are the machinations we referred to and the machinations come in all forms and disguises because you are having an opponent trying to choose the coach of a particular team.

ND: There is some vile that is coming out of the party towards Douglas Mwonzora, your secretary-general, on allegations that he had a hand in this judgment?

JM: We have not seen that evidence as a party. We know that the system always wants to work with people inside. It is very important for leaders to distance themselves from certain invitations, certain statements to be unequivocally on where they stand in defence of the party. Sometimes, when leaders prevaricate and are not able to answer or are lily-mouthed in their responses to certain invitations and aspirations, it leads to conclusions being drawn. We have not accused anyone to this point and once we get the evidence, yes, the party has the capacity to deal with such individuals, if any.

ND: Mwonzora is quoted elsewhere saying he gave advice to the party and its leaders on how to avert this crisis, what was the advice.

JM: Well, I am not privy to that advice, he is the party and its leadership ostensibly. How does a person advice himself? You cannot separate him from the party. If he did say that, then that is an awkward phrasing of events. It is like me saying I have advised the party, I am the party, the decisions that come out of internal debates bind the entire leadership. It is such utterances that then invite different meanings from people who are malicious. The party is the collective of its leadership and once they have taken action they do so in their entirety.

ND: There is a statement already out there which says Thokozani Khupe wants to come to Harvest House, is that possible?

JM: (laughs) We say that people can hallucinate. They can daydream or they can conjure phantoms. As far as we know, she has her own party, she held her own congress, fielded her own candidates; she has a motley crew of leadership, one of which they have just recently fired, Linda Masarira and, therefore, it is an entirely different set-up. The issue we have with her is here, she continued to use the MDC-T name, continued use of the party symbols, continued use of paraphernalia that is associated with the MDC and our late icon (Morgan Tsvangirai) and that matter is pending before the courts and it will be heard in the fullness of time. We will defend the interests of the party and we will make sure that party symbols and everything else that the party needs to use is not abused in any particular manner. It would be foolhardy for them to extend this joke beyond where they have taken it by trying to physically impose themselves on the party membership to try and impose themselves on party institutions and party activities. That would be taking a bad joke too far.

ND: Can you please clarify if it is possible for one to impose themselves on members or it is now a war for party assets.

JM: It appears it is now a matter of looting; it is another different matter and will be addressed at the right time. The issue of her coming to the MDC to lead it is not even part of the judgment, so we would not understand where she is getting it. The judgment as it stands, says she was supposed to have been interim leader and was supposed to have called for an extraordinary congress when our founding leader passed on. That time has already lapsed and she has already formed her own party. If the judgment wanted her to call the extraordinary congress, it would have been explicit that Khupe shall call for it. The judgment left the party without a president, it did not install one, and in that case, reading that judgment, it is clear that whoever is in the line of succession in this case, the party chairman should call the extraordinary congress.

ND: There have been reports that the party is in sixes and sevens following this ruling, is it correct?

ND: You are a party with lots of lawyers, who appear before the courts every day for a living, yet you appear not to respect the courts, do you turn to something else when you are in politics?

JM: No! No! Every judgment of the court can be criticised, the Chief Justice Luke Malaba has indicated that any judgment they make can be criticised. We can fundamentally disagree with a judgment; it does not mean you have disrespected anyone. What we say in terms of the law jargon is that we respectfully and fundamentally differ with a judgment of a particular court, which is not a sign of disrespect, it is a sign of democracy, it is a sign of the rule of law and it does not go on one side.

ND: Are you democrats?

JM: Yes, we are democrats. That is why we are saying the leaders of the party are chosen by members, democracy is the ability to say how do you chose.

ND: But we have heard the people in MDC complaining about the use of violence, intimidation and disrespect of your own constitution as indicated in this ruling. Does that impair your record as democrats?

JM: Over 500 000 of our members took part in branch elections and no serious injuries were reported, no death was reported; that was a display of democracy.
ND: When you say there were no injuries, but people were taken to hospital in Chitungwiza, what does that mean?

JM: That was one person not people.

ND: Is that one not too many?

JM: Well, in the grand scale of things, one had to look at the multitude of elections that occurred and that there is only one reported case that had been swiftly investigated and corrective measures taken.