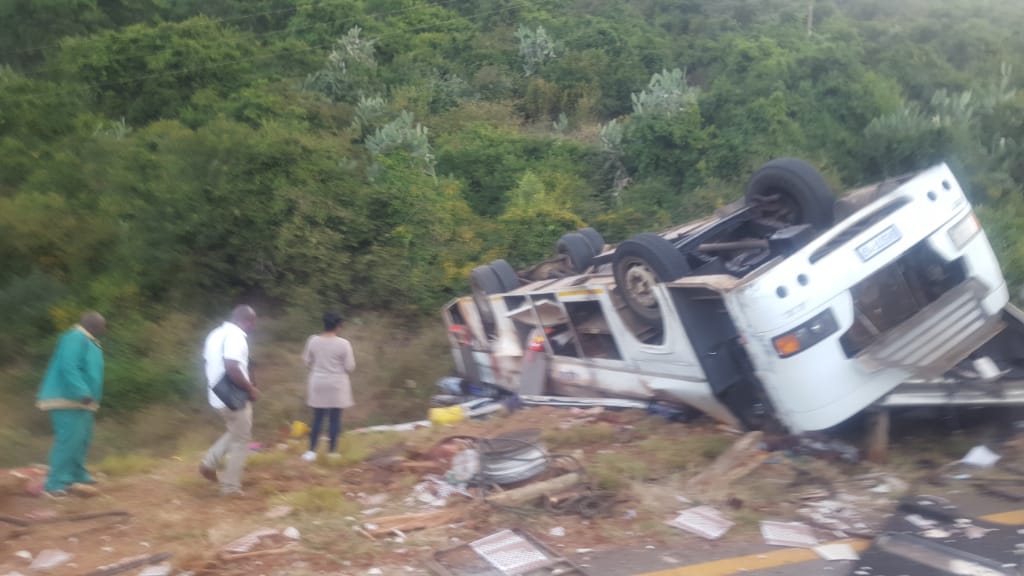 Survivors of the Marsmery bus accident which killed 13 people in Limpopo on Monday blame “tired” drivers for the mishap.

The bus was travelling from Johannesburg to Harare when it veered off the road and overturned on the N1 north, near the Ingwe Hotel in Louis Trichardt.

Speaking to GroundUp on Tuesday from a hospital, Medusa Mamvura, who was injured together with her child said:

We were supposed to leave Pretoria on Sunday (5 May) for Zimbabwe but that was not the case.

We had to spend the whole night waiting for the bus until Monday morning. The bus arrived around 5 am on Monday. The drivers did not rest.

We loaded our goods and off we left for Zimbabwe. We were not happy going back with the same drivers and insisted on being refunded but that fell on deaf ears.

Another survivor who escaped with serious injuries, Ruramai Torima had this to say:

As we passed Louis Trichardt towards Messina there was a steep slope and the bus was speeding, leading to the loss of control.

All I can remember is crying for help and at the same time pulling my child out from under the seat.

A Zimbabwean man, Chizivana Moyo, who lost his wife and three stepchildren in the accident said:

I lost my wife and three stepchildren in this accident. I do not know what to do. At the weighbridge near Polokwane, we realised the bus was not in good condition.

The driver did some touch-ups [tightening exhaust nuts] on the bus and we suspected something was not in condition.

The driver and vehicle fitness for long distance cross-border buses is a matter of deep concern to us. It is about time that our law enforcement officers step up their routine checks on these buses to prevent this kind of accident from happening.

I also call upon drivers of buses and other public transport to take rest in between trips as the lives of passengers remain in their hands.