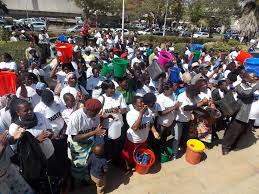 Harare residents are up in arms with the Harare City Council over its propensity to demolish unregulated houses.

The Combined Harare Residents Association’s (CHRA), said that the City fathers need to respect the rights of citizens.

In as much as we do not condone illegal housing structures, we note with concern that the City of Harare has failed to respect citizens’ right to freedom from arbitrary eviction as enshrined under section 74 of the country’s supreme law.

We reiterate that the council must be armed with court orders rather than the gun when effecting the demolitions and we demand council to follow proper procedures before demolishing houses.

Meanwhile, Harare spokesperson, Michael Chideme, revealed that the city council has no plans to demolish structures but will move to regulate all unregulated houses.

One Comment on “Harare City Told To Desist From Demolitions”