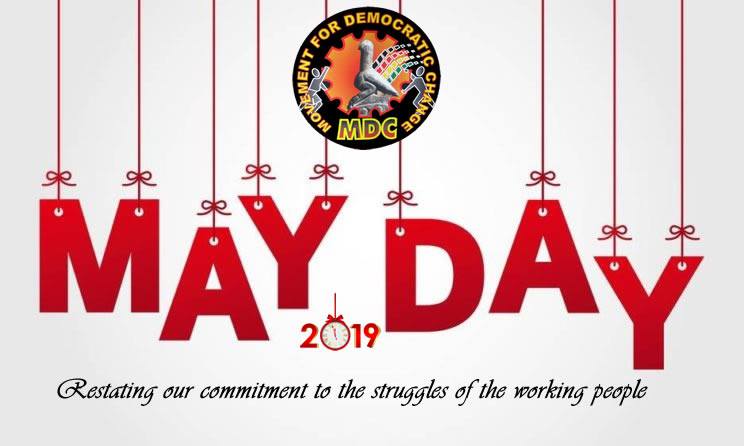 May Day message: Restating our commitment to the struggles of the working people

The MDC is headed to Buhera to celebrate the life of a veteran Unionist, the face of the struggles of the working people of Zimbabwe. Dr Morgan Tsvangirai, the founding father of the party did battle, together with other champions like Gibson Sibanda and many others, fighting for labour rights at home and beyond our borders.

It is the MDC’s privilege to follow through the giant’s footsteps as we take stock on May Day. We count the costs and question the benefits of the status quo.

Companies closed en masse from August of 2014. The economy has been informalised. Jobs have been lost, the search for employment is now futile, and the pursuit for decent work becomes, therefore, a futile exercise.

We have witnessed a drastic shift in labour market flexibility. A Labour Amendment Act was enacted and rendered the worker legally disposable.

Workers were retrenched without benefits, paid a paltry three months notice package plus two weeks wages for every year served.

Preceding that period, pensions to the tune of US$6 billion had been lost due to Zanu PF mismanagement of the economy, according to the Justice Commission report.

Workers have been declared enemies beyond reconciliation, the State has conflated with Capital. Labour rights are curtailed, unions are criminalised and their leaders are thrown in the same jail cells with bank robbers and rapists.

The cost of living has gone beyond the reach of the working people, they cannot buy bread, and wage value has been eroded. They are taxed to death.

The status quo has failed the working people of Zimbabwe.

As we restate our commitment we make known our plan for the working people as we put it in our SMART blueprint. We endeavour to create a Shared Inclusive Economy characterised by the following: