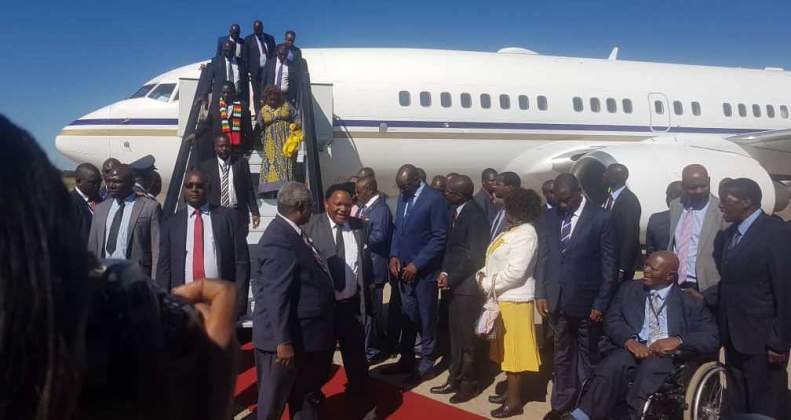 Commentators have expressed dismay over President Emmerson Mnangagwa for using luxury jets chartered from the Middle East for his domestic and foreign travels.

Political analyst Maxwell Saungweme told the Daily News that Zimbabwe is certainly nor on the path of austerity as shown by government officials’ opulence. He said:

I don’t agree with austerity, but one has to be so detached from reality or basic economics to believe that Zimbabwe is pursuing austerity measures.

Austerity in Zimbabwe is on paper and in Mthuli Ncube’s bedroom or library or it exists in whatever he smokes.

You can’t have a bloated government spending more than it is getting as you pay lip service to austerity. That Mnangagwa is jet-setting and at a huge cost to the fiscus should tell you that you have a regime that speaks austerity and acts superfluously flamboyant.

The only thing Mthuli did was to heavily tax everyone including micro-income earners to broaden revenue base so that they spend more in government.

This is not austerity but politically-motivated penury and poverty of the masses by a high spending and a high-flying capitalist regime that does not believe in austerity but high-spending on luxuries.

Speaking to the Daily News, MDC spokesperson Jacob Mafume said that extravagance and opulence on the part of government is economic terrorism. Said Mafume:

Everyone in the country is suffering but they see it fit charter expensive jets to fly in simply to go to Bulawayo.

There is no money, they increase prices at will, parastatals are increasing prices, there is no walking the talk.

President Mnangagwa denied that he draws from state coffers to hire the private jet. In fact, he claimed that the Crown Prince of the United Arab Emirates, HH Mohamed bin Zayed Al Nahyan, offered him the Airbus A318-100 jet for use at any time of need without any payment.