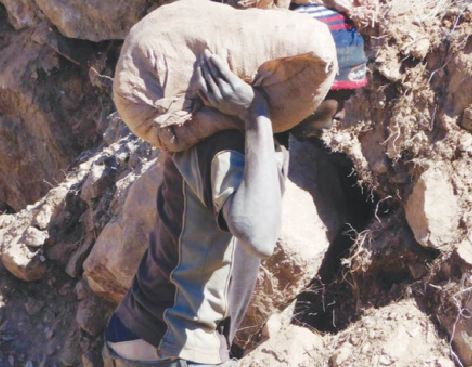 A report claims that military personnel and police officers deployed to guard Gaika Mine from illegal gold miners have joined the trespassers in looting the precious metal.

The Independent claims that the government is now considering bringing in the Mutare-based 3 Brigade to replace the soldiers from the nearby Fife Brigade. An Independent source said:

The soldiers are still on the ground. They are from the nearby 5 Brigade and have the backing of officers from the police’s Support Unit.

It has however emerged that their presence has not helped matters that much as they are either being paid by the illegal miners to allow them in or joined in digging for gold altogether.

It was also realised that some of the soldiers are already well-known to the miners and this has not helped matters.

So from our side, we have recommended that the best possible move would be to replace them with soldiers from a distant brigade and my understanding is that they are considering military officers from 3 Brigade in Mutare.

According to the report, State Security Minister Owen Ncube intended to have gold panners continue activities on the mine at the expense of the owners. The source said:

The minister wanted to argue on the technicality that he had travelled outside the country for medical treatment when Joc resolved to deploy soldiers to the mine and so the deployment was unprocedural since he chairs the National Security Council.

The two (Ncube and Mpereri) own a gold milling plant in the area so they think if the artisanal miners are kicked out, they will not benefit.

You have to understand that the miners only realise 30% of the gold through milling and the remaining 70% is recovered through cyanidation of the ore that remains once grinding is done.

So what happens is that the miners bring their ore for grinding and, once that is done, they leave the rest to the owners of the mill.

Gaika Gold Mine is located in Kwekwe in the Midlands province. It is a joint venture between China Africa Investment, Development Co. Ltd (CAIDC) and Duration Gold Limited (DGL) owned by British-based Clarity Capital.

The mine has been under siege for some time from local machete-wielding gangs who are alleged to be working for Ncube and Mupereri.