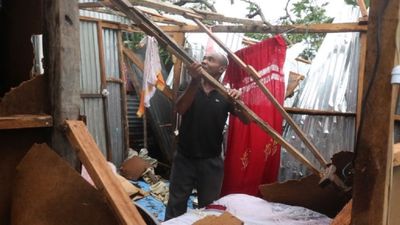 Cyclone Kenneth, with strong winds of up to 140km per hour, lashed across the Comoros islands in the Indian Ocean on Wednesday night, killing 3 people.

According to reports, Cyclone Kenneth caused widespread power outages in the capital Moroni and in other areas.

By Thursday afternoon, Kenneth was headed towards Mozambique where it is expected to strengthen before hitting the coast.

According to Dipuo Tawana, forecaster at the South African Weather Service, cyclone Kenneth could bring seven- to nine-metre waves and a three-metre storm surge.

Tawana added that the cyclone could linger over Mozambique until late Monday evening. She said:

The rainfall that we forecast for the next four days in the northeastern part of Mozambique – we have between 500 and 1,000 millimetres (19.5 to 39 inches) of rain.