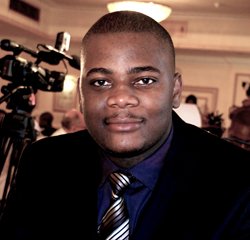 Zimbabwe journalist Mduduzi Mathuthu has been selected among other journalists from Africa for a reporting tour of the United States of America and South Korea.

Zim journalist @Mathuthu is part of a group of select journalists from Africa on a reporting tour of the U.S. & South Korea. He will meet government reps, think tanks, nonprofits & other institutions to understand U.S. foreign policy. All the best!

Mduduzi Mathuthu is a journalist and the founder of a Zimbabwe UK-based popular online paper, New Zimbabwe.com.