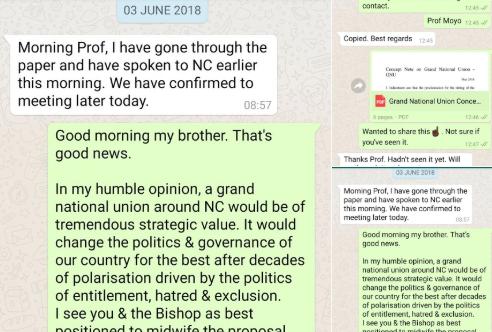 Shingi Munyeza, a Zimbabwean cleric, entrepreneur, and member of President Emmerson Mnangagwa’s Advisory Council, has been accused of being a junta and CIO spy.

The information was revealed by former cabinet minister in President Mugabe’s government, Professor Jonathan Moyo, who on Saturday night posted private messages between himself and Munyeza on Twitter.

Moyo said ahead of the 2018 elections, Munyeza presented himself as a Nelson Chamisa confidant to people working to advance an opposition grand coalition led by Chamisa. Moyo said Munyeza asked for a meeting with ousted president Robert Mugabe in June 2018 and the meeting was arranged. An unidentified Bishop took Munyeza to the meeting with Mugabe and Munyeza recorded the minutes.

Munyeza’s cover as an operative for Mnangagwa, according to Moyo, was blown later after the meeting and after that, he was fed lies to take to Mnangagwa.

President Mnangagwa eventually won the 2018 elections by a thin margin but the opposition maintains he stole the election.

Jonathan Moyo posted the messages after Munyeza himself had threatened to post private messages between the two men publicly in an effort to out Moyo.

Moyo dared him to post the chats. Munyeza has so not posted the private chats he’d threatened he would. He said instead that he had only pretended he would post the chats to bait Moyo into doing it himself:

I knew Jonso will eventually do it, which he did. I didn’t need to do the unethical thing when someone could do it.

Zero. Discussions with him ended on 5 June 2018 when his cover as a junta & CIO spy was blown. He tried to present himself as NC’s confidant but nobody took him seriously about that. Instead he was fed lies to take back to his junta masters!

Jonathan Moyo is in exile following an attempt on his life during the coup that deposed President Mugabe. Shingi Munyeza was asked to join a Presidential Advisory Council (PAC) that was put together by Emmerson Mnangagwa in January 2019 during a violent crackdown on Zimbabweans by the security forces following the Shutdown Zimbabwe protests.