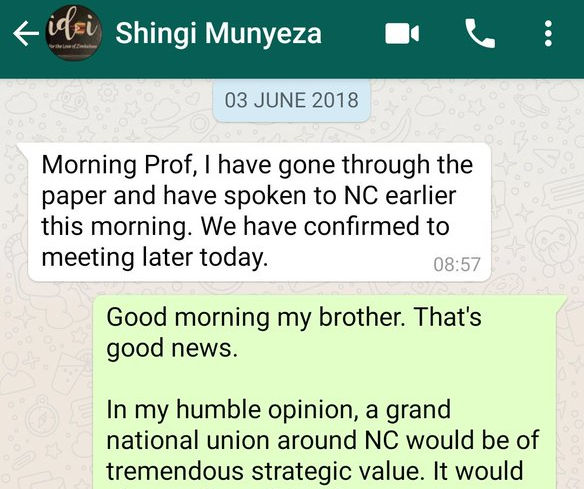 A fight on the Twitter social media platform between Jonathan Moyo and Shingi Munyeza ended with Moyo posting of private WhatsApp chats they did in 2018.

What started the Twitter fight is a Friday night tweet by Jonathan in which he said that the Presidential Advisory Council had had a meeting where Trevor Ncube “came under heavy fire for failing to reign in his media empire”. He also mocked Ncube referring to him as a PAC propaganda chief and [Mnangagwa] regime’s PR Manager:

Both Munyeza and Ncube accused Moyo of blatant lying. Moyo in his defense said that PAC meetings are confidential and that the two couldn’t accuse him of lying yet they could not disclose the actual facts.

Later, on Saturday afternoon, Jonathan Moyo posted another tweet in which he mocked the two Presidential Advisory Council members for being failed businessmen coopted into the PAC to tame them.

To this, Munyeza responded that Moyo was desperately grasping at straws and accused Moyo of always coming to his inbox when in trouble:

At that point, Moyo accused Munyeza of lying. Munyeza then threatened to post private ibox messages to prove that Moyo comes to his inbox asking for help:

I’m still here running those businesses here and in SA. What is your current location right now? So why do you come for help in my inbox if I’m such a failure. Give me permission to post your inbox here and now. So we finish this conversation here and now.

Instead of posting the inbox, Munyeza introduced a condition, bringing in the disappearance of Itai Dzamara into the conversation:

Another condition: Please tell us your role on the disappearance of #ItaiDzamara. I will then post the inbox from there on.

To this, Jonathan Moyo then went ahead to post the inbox messages himself:

Time to tell the truth and shame the devil. Here goes

Here’s the last bit of VERIFIABLE msgs exchanged. It’s an untold tragedy when a man of God who swears by the holy bible during the day, is ACTUALLY a devil’s workshop, who spends the night doing the devil’s work. Fake Pastor Shingi Munyeza is satanic and politically dangerous!

Lastly, for now. On 3/6/18 & 5/6/18 @ShingiMunyeza & a DECENT MAN OF GOD sought audience & met with Pres Mugabe to get him to support a GRAND COALITION against the military junta. SHINGI WROTE THE MINUTES. It later transpired Shingi was a junta operative & the rest is history!

The Bishop who picked up Shingi on 5/6/18 to a meeting with former President Mugabe & dropped him off after the meeting is an honourable man of God in Zimbabwe. The meeting sought to persuade Pres Mugabe to support a grand coaltion for the 2018 election. Shingi took the minutes! 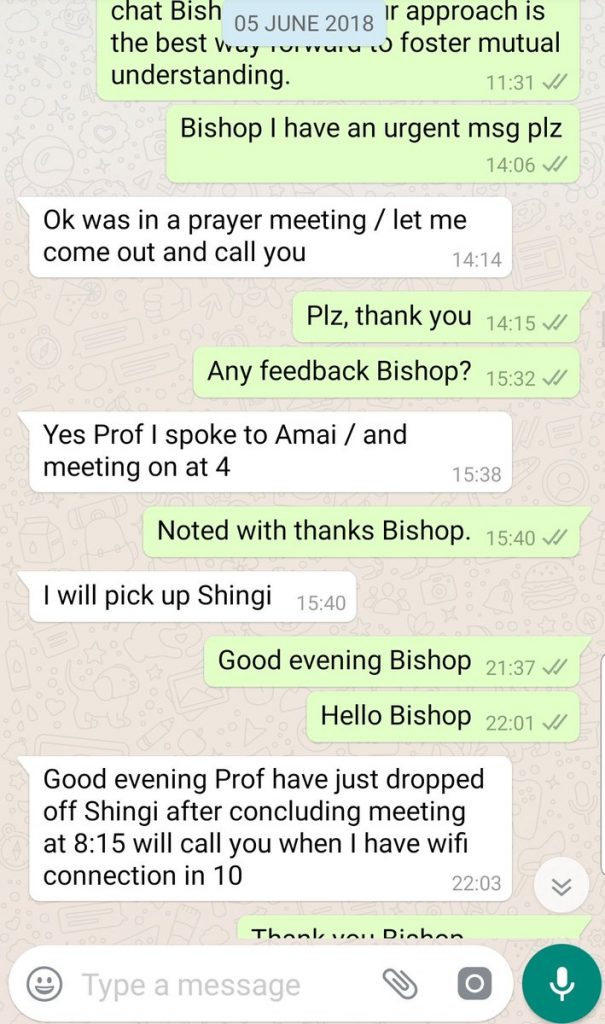 Following the revelations, Munyeza didn’t tweet any inbox messages as he had promised to. Instead, he said he had lied to bait Jonathan Moyo into posting them himself as this was an unethical thing to do:

This story needed to be told and have always wanted a moment for it and thanks to @ProfJNMoyo for the opportunity, he took the bait. I’m grateful.