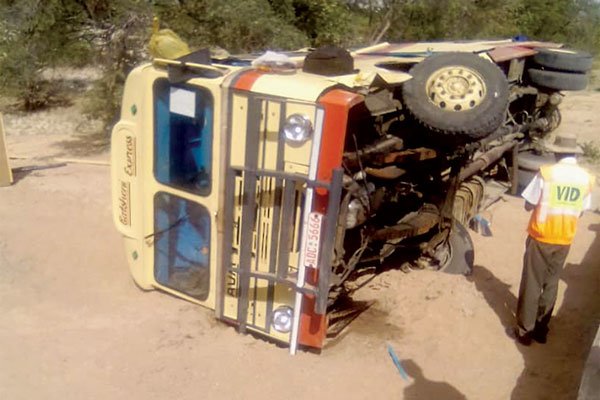 Three passengers aboard a Gatsheni Express Bus were on Tuesday seriously injured in Plumtree in a freak accident.

The bus’s front wheel reportedly came off as the bus entered a narrow bridge in Dombodemba, Bulilima, Matabeleland South province. The driver lost control as the bus, carrying 20 passengers, plunged into the riverbed and landed on its side.

Yes, we received a report of an accident involving a Gatsheni Express bus, which plunged off a narrow bridge at the 34km peg along Plumtree-Dombodema Road.

There are no recorded deaths. Only three passengers were seriously injured. Two of them were treated and discharged and the other one is still admitted at Plumtree District Hospital.

The bus, which was being driven by Nkosiyabo Moyo (31), dislodged its right front wheel on arrival at the bridge and the driver lost control leading to the bus plunging off the bridge.

We appeal to bus operators to check their buses for defects before embarking on long journeys to avoid unnecessary accidents, which could lead to loss of human lives.

A passenger who escaped from the accident unhurt revealed that the driver was overspeeding. He said:

He was speeding and failed to keep the bus under control. The wheel which dislodged could have been as a result of the bus hitting pillars on its way into the bridge. That road is narrow and dusty, with a small patch of tarmac and speeding in such a road is dangerous. It’s sheer luck that no life was lost in the accident.

Plumtree is a Town located in Matabeleland South Province in Zimbabwe. Read More About Plumtree