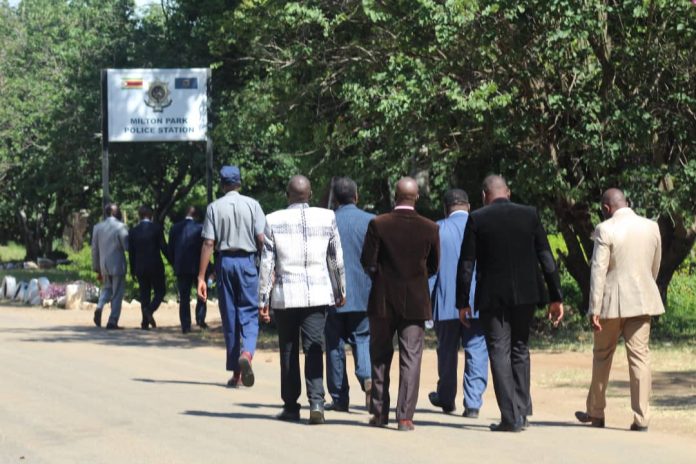 A church service at the AFM Milton Park nearly descended into a fist fight as two factions jostled over the church venue.

The Apostolic Faith Mission in Zimbabwe is in the throes of internal power struggles as roughly half the members rally behind Reverend Amon Madawo while the other half has sworn allegiance to Reverend Cossam Chiyangwa.

Anti-riot police had to be called in to diffuse the tensions as a pastor was nearly beaten.

Reports indicate that there was a gentlemen’s agreement that the factions would hold services at different times. However, the Madawo faction could not stick by the deal and started to have sessions at the venue without agreement or consultation with the other part.

According to a Mail and Guardian source who was at the service;

We had agreed to have 1 service until the court decides on the leadership but these guys secretly went to people’s inboxes and told them that they were having a service at 8 am.

These guys who are leading the Madawo faction were once the church board which was removed after congregants realized that they were mismanaging funds and making decisions without consulting the congregants.

After the near-fistfight furore, the congregants were taken to Milton Police Station where they smoked the peace pipe and agreed to consult each other on church issues while they await a court ruling.