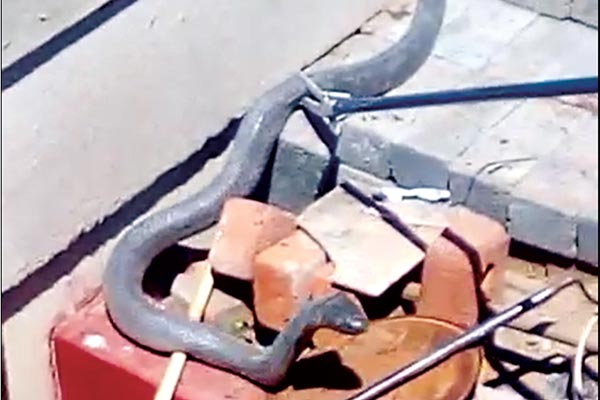 Residents of Nkulumane 12 suburb in Bulawayo were left shocked when a three-metre-long cobra slithered from house to house on Tuesday night and Wednesday morning.

A Zimbabwe Parks and Wildlife Authority (Zimparks) ranger, Ahmed Mohamed Esat, was dispatched to catch the snake and it took him three hours to subdue the venomous reptile. The snake was the fourth one that the renowned snake catcher had to contend with in a single week.

According to eyewitness accounts, the Cobra was first noticed on Tuesday night when it slid into a house close to the Roman Catholic Church, which has a large vegetable garden.

The following morning, it entered another house, three houses down the street from where it was first noticed.

The snake took cover under a pile of bricks and residents had to call Zimparks after they failed to entice it to come out.

Speaking to The Southern Eye, Esat said the snake could be 3 to 4 years old. He said:

It’s about three to four years old. This is the fourth snouted cobra I have captured within a week.

I have captured a lot of snakes. You can follow my works there (on Facebook). I have also plans to work with the media to conscientise residents about my work and snakes so that they stay out of danger.

The snouted cobra is a large snake and when fully developed, it ranges from 1,2 to 1,8 metres in size, though in extreme cases some can reach a length of 2,5 metres.