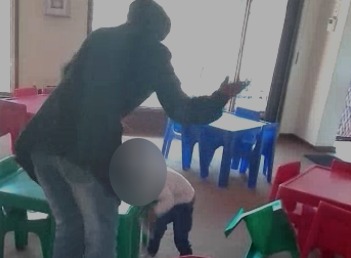 A South African pre-school teacher has been filmed beating up a little child, accusing it of vomiting in the classroom.

In the video, the teacher lowered the child’s pants and gave it a shellacking on the buttocks.

She then hits the crying child several times on the head and orders it to clean its vomit.

The video has since gone viral on social media, raising the ire of the public. The issue has been brought to the attention of a senior education official, the Gauteng education Member of the Executive Council (MEC) Panyaza Lesufi on Thursday.

Lesufi said he could not even finish watching the “disgusting” video and vowed to find the creche and “pounce”.

Several people who commented about the incident on social media expressed anger and horror.

A Twitter user by the name Lindiwe Skosana said:

All crèches must have CCTV cameras, even if it means government funds them. We are up in arms when we see videos of the violence that happens in schools but who’s the voice of these defenceless little kids?!

A lot more of this is happening and we’ll never find out unless cameras.

Meanwhile, reports from South Africa indicate that the police have confirmed that the teacher seen in a video assaulting the young child at creche on the West Rand has been arrested and appeared in court. Another teacher opened a case.

The incident comes as the Constitutional Court in Zimbabwe outlawed corporal punishment as an inhumane and degrading form of punishment.