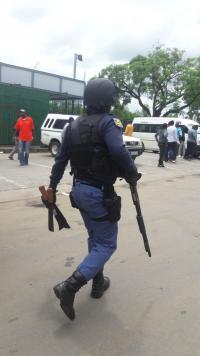 The violence that broke out in South Africa recently is likely to risk Zimbabwean business, the Confederation of Zimbabwe Industries (CZI) has revealed. The CZI indicates that this is because local business have been increasingly using the Durban port for imports lately.

Sifelani Jabangwe, the CZI president, revealed that the increased use of the Durban port by local businesses resulted from the demise of infrastructure in Beira, Mozambique. Jabangwe said:

I spoke to the Minister of Industry yesterday about this and told him that I was concerned that not enough was being done to manage this. From a business peerspective, we are at risk as Durban is our main trade route.

On a positive note, violence has decreased in South Africa following castigation of violence by various individuals, groups and institutions.

Ramaphosa’s earlier statement on ilegal ownership of businesses by foreign nationals had been interpreted in some circles as inciting violence.