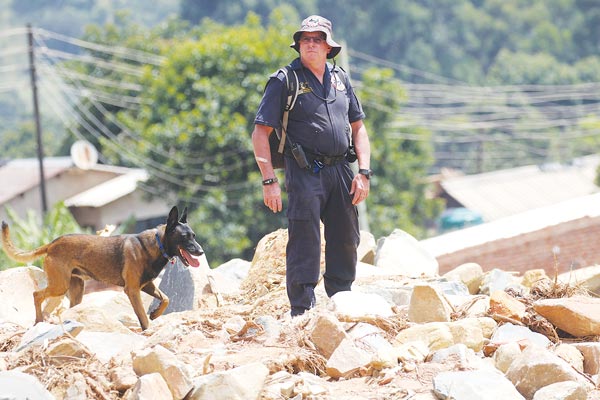 Sniffer dogs from South Africa were on Thursday deployed at Ngangu township in Chimanimani where they had identified 10 sites by midday where bodies are believed to have been buried under rubble.

The South African team was accompanied by members of the Zimbabwe Republic Police and is being funded by Gift of Givers Foundation in partnership with HigherLife Foundation of Econet Wireless.

Police Assistant Commissioner responsible for operations in Manicaland, Njabulo Ndofandaedza welcomed the deployment of the South African dogs. He said:

I am glad that the South African dog handlers have come to assist us.

What is happening here is that they are assisting us to identify places where some bodies could be buried underground.

So far, the process is going on well. As you can see, they have identified some places and what remains here is excavation to retrieve the bodies.

However, an elderly lady was angered with the late deployment of the South African dogs. She said:

So you tell me that the whole country does not have dogs? This is a joke.

The sniffer dogs should have been deployed a long time ago. So they (government) have dogs to set on us when we protest and don’t have dogs to search for dead people in case of a disaster? Shame on them.

Meanwhile, the dogs will also comb Dzingire area, popularly known as Kopa over 300 people were submerged after the floods washed away about 80 houses.