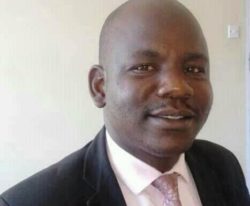 Bulawayo Mayor, His Worship Councillor Solomon Mguni walked out of an interdenominational Cyclone Idai memorial prayer meeting after one of the preachers castigated opposition political parties.

What was supposed to be a service to remember hundreds of people who were killed by Cyclone Idai turned into a ZAPU PF praise and worship service when pastor Frank Kunda grabbed the microphone.

Speaking to the Daily News about the incident, Ward councillor, Mlandu Ncube who was at the event said:

That was unexpected from a senior pastor like him; Imagine he turned the emotional Sunday service into a Zanu PF praise rally.

He praised Mnangagwa for ‘his visionary leadership and foresight’ which praise offended His Worship the mayor of the City of Bulawayo, Mguni and is a delegation of seven councillors.

The behaviour offends against the spirit of unity in diversity in the city and more particularly in that we had been invited to pray for victims of Cyclone Idai. There was, with respect, no need to politicise the process.

It was a call to duty. It was a prayer service for the metropolitan province in view of the declaration of two days of mourning by Mnangagwa. People must distinguish a political party business from a government function.