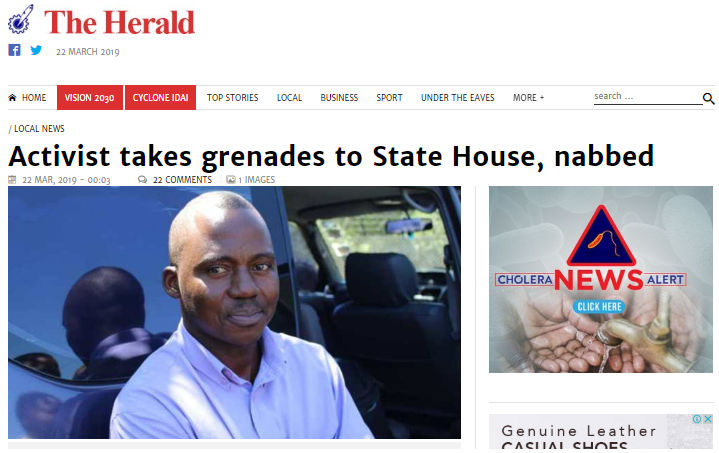 The activist journalist who was freed today by a Bulawayo magistrate has said that he will be suing government-controlled daily (The Herald) over its story that falsely claimed he had Grenades at a state event.

The journalist, Zenzele, said in a tweet this evening:

The Herald story in question had the title “Activist takes grenades to State House, nabbed” and inside contained the following excerpt:

An activist was yesterday arrested at the Bulawayo State House where President Mnangagwa was meeting Matabeleland civil society leaders after he was found in possession of items that looked like grenades.

Police arrested one Zenzele Ndebele for conduct likely to breach the maintenance of public peace, in an incident with a chilling reminder that President Mnangagwa was bombed at White City Stadium last year.

Details were sketchy last night, with authorities ascertaining the nature of the objects, but preliminary indications were that they could have been chemical weapon cannisters such as teargas, likely to be thrown in an offensive posture.

Zenzele was arrested earlier in the week and charged with possession of an offensive weapon after he was found with 2 used tear gas canisters. He was free today by a magistrate who remarked: “It beats logic that a used canister and an empty cartridge could be defined as dangerous weapons if weapons at all”