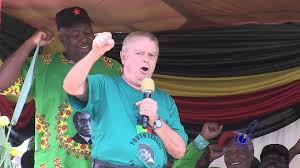 The Deputy Minister for Lands, Agriculture, Water, Climate and Rural Resettlement, Vangelis Haritatos said that the government is working on measures to mitigate the effects of climate change.

Some of these measures include irrigation farming and the growing of drought-tolerant crops. He said:

We are working on measures to adapt to the potential effects of El Nino.

Climate change is real and its effects need strategic planning so that in future its effects on agriculture are minimally felt.
Irrigation has become the answer to crop production as rain-fed agriculture is no longer sustainable.

We have been providing farmers with drought-tolerant crops such as small grains, short and medium season varieties of maize, and our scientists have also been breeding heat-tolerant crops.

We are also working on irrigation rehabilitation, development and expansion with the assistance of partners.

We want to ensure that we develop 200 hectares of irrigation per every district although this intervention has been affected by a shortage of funds.

The government cannot go it alone, so we have engaged willing partners who are helping us with the requisite financial resources.