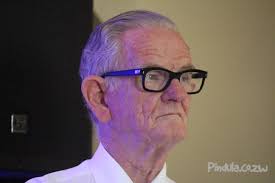 Speaking at a meeting on the state of the economy organised by the British Council, Robertson said:

At last, our situation has started to look promising. We all know the uncertainties that we have been battling with for years.

We have had shortages of bread, cash, fuel and various imports, including job opportunities and everyone, has their list of which I can say that our lists are now shorter. In spite of that, I would still say our situation looks more promising anyway.

What has changed? Well, the government has decided to let market forces decide the exchange rate for what is our almost new currency with our virtual RTGS dollars . . . Stability is an important objective from so many points of view, that if it can be reached, it would be a very worthy achievement.

We still have a lot to do to improve, but stable conditions would encourage investment and investment is the most important prerequisite for job creation.

Price stability will encourage business expansion, the efforts needed to establish new markets, the resourcefulness needed to design better products and the courage needed to venture into new areas of business opportunity.

And job creation will alleviate poverty and poverty is one of the more serious problems right now.

John Robertson is an economist in Zimbabwe. He is known for his analysis of the Zimbabwean economy published especially in the privately own media. Robertson founded and runs an economics consultancy company, Robertson Economics. Read More About John Robertson

Zimbabwe RTGS Dollars are a Zimbabwean currency introduced on 20 February 2019 by the Reserve Bank of Zimbabwe. At introduction, the currency consisted of existing RTGS balances in bank accounts, Bond Notes cash and Bond Coins. The introduction of the RTGS Dollars was announced by... Read More About RTGS Dollars