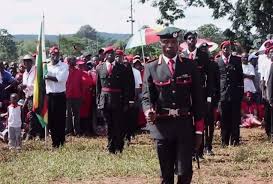 As the MDC Congress draws near, MDC president Nelson Chamisa is seemingly coming under attack from every direction. A ZANU PF activist on Twitter narrates how Chamisa grabbed power in the MDC party soon after the death of its founding president Morgan Tsvangirai. Below is a full thread of the accusations:

The day Shakespeare Mukoyi, Commander-in-Chief of the Vanguard was to appear on Kwirirayi’s ZiFM show, he wanted to bury Charlton Hwende and Wamba (Nelson Chamisa) and tell all about how they used him and violence to take over MDC last year. Mukoyi had been promised the Kuwadzana seat.

The promise for Kuwadzana seat, which Wamba was vacating, was good for Mukoyi to do violence for Wamba since it was a “safe seat”. But Hwende who is from Kadoma also wanted the safe seat. So he took Mukoyi on.

Prior to his Kwirirayi show on ZiFM Stereo, Mukoyi widely circulated a video of his appearance. That day I had passed through Wamba’s office, he was a worried man, quite frantic.

Around 6 pm, most MDC top honchos were waiting eagerly for the show.

A couple of days earlier, Wamba (Chamisa) had called Shakespeare Mukoyi and threatened to fire him from the party.

But Mukoyi reminded him that he had no such powers and was illegitimate anyway.

Meantime, the Kuwadzana seat primary had been postponed several times with Hwende complaining that Shaky Mukoyi was threatening him with a gun.

Hours before the Vanguard appearance of Mukoyi on the Kwirirayi show, the man of God, Pastor Wamba dia Wamba and Charlton Hwende were left with no option but to pay Shaky Mukoyi $10 000 to be quiet!

He took the Cash and played truant on Kwirirayi. He was a no show.

Kwirirayi kept calling him, but Shaky let the phone ring off. But at this point, he had $10 000 in cold cash.

Remember after Morgan funeral there was severe violence in Bulawayo that led Khupe and Gutu to say no, this is not what the MDC stands for. Even Jessie Majome (former MP for Harare West) complained about Vanguard. [MaDube] complained too but did not condemn the instigator.

MDC has been sustained by violence for many years. That’s why the likes of Ian Kay left because it was becoming an unfamiliar animal.

Wamba’s challenge today is, he used Vanguard and alienated it. That’s why people saying Chete Chete are outsiders like Biti and Job Sikhala.

The Pastor’s leadership did not come from MDC structures or the people. That is the bone of contention today! It’s a significant issue.