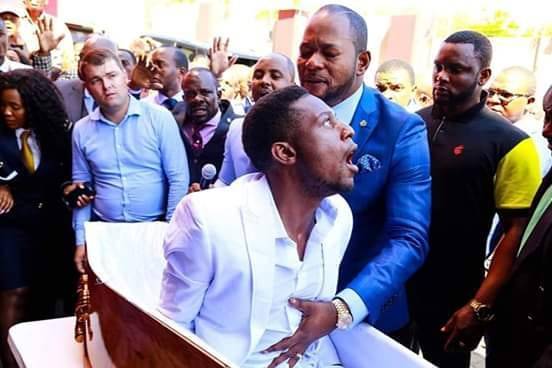 A Zimbabwean man who was supposedly resurrected from the dead at a South African church over the past weekend was recognised by workmates who claimed that he once did something similar for the same pastor.

Brighton Moyo was “called back from the dead” while lying in a coffin by Pastor Lukau of Alleluia Ministries last Sunday.

Moyo worked for a timber company in Pretoria, it has been revealed. His employer Vincent Amoretti told eNCA News that he was shocked when he recognised the “stuntman”. He said:

We suspended him a couple of weeks ago for missing a Monday and coming late on a Tuesday. He was suspended with full pay but he never came back.

We wondered what happened to him and one of his friends came into the office and brought a video saying Brighton had died. I love my employees, we have 50 guys here and to know that one of them had died I was shocked.

When I watched the video and saw him lying in a coffin and I saw his mouth breathing I said, ‘he’s not dead!’ Then I saw him come to life, looking all around. It was crazy. It was really a big joke.

… From what I hear from my staff, he was trying to get people to come and do the act with him. I believe he has done a stunt in a wheelchair where he got up and he walked away. He tried to solicit the people who work for me to come and do the shows with him, it’s an ongoing thing.

The National Constitutional Assembly (NCA) is a Zimbabwean political party headed by lawyer and activist Lovemore Madhuku. The NCA was formed in 1997 as a political non-governmental organisation pushing for constitutional reforms. In September 2013, after the adoption of a new Constitution in Zimbabwwe that... Read More About NCA