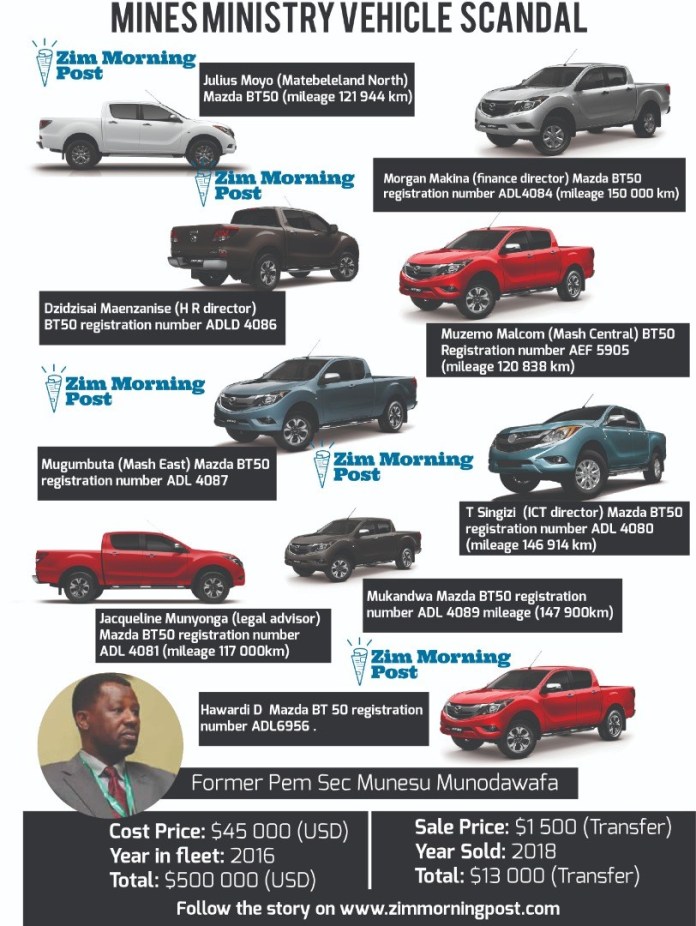 The vehicles scandal involving senior employees at the Ministry of Mines is an insult to the taxpayer and an indictment to the military government’s rhetorical intention to fight corruption.

The MDC has been arguing that the country needed saving from the hands of a very dangerous cartel which fits the description of George B.N. Ayittey that states that a Vampire state, is one in which the government has been hijacked by a phalanx of bandits, gangsters, crooks, and scoundrels, who use the machinery of the state to enrich themselves, their cronies, supporters, and members of their own ethnic, racial, or religious group and excludes everyone else.

It is unacceptable for the State to lose half a million US dollars to less than ten individuals who imported cars in the name of government only to change ownership in a blink of an eye.

These individuals park imported vehicles and proceed to hire cars for daily duties yet the imported cars were supposed to serve that purpose.

Yet again, millions of public funds are lost in this hiring exercise.

Surprisingly, Mnangagwa in his lack of wisdom created a so-called corruption crack unit in his office in violation of the constitution, supposedly to intensify the fight against corruption.

The crack unit is not only illegal and a waste of tax payer’s funds but clearly ineffective. If anything, corruption continues to blossom.

A few weeks ago, a shocking announcement of the resignation of the entire anti-corruption commission was made with no details provided.

It is, therefore, concerning when these incidences are exposed in the absence of a very important Constitutional independent Commission. Sad to say, even in the presence of the said Commissions, they are pacified, politicized, incapacitated and undermined by the military government.

We saw the undermining and attack on the Zimbabwe Human Rights Commission recently for releasing an objective report on human rights violations in January by the state. The courts were swift and ruthless on a man who was charged with stealing a plough during the National Shutdown yet people who swindle the state of millions get away with it.

State security details targeted innocent MDC members and mass arrests took place only for hordes to be acquitted. Yet those with clear cases to answer walk scot-free.

The MDC calls for a comprehensive investigation into this scandal and a full investigation of all vehicles imported for executive use in all government departments.

More importantly, the MDC reaffirms that the following must be done in respect of corruption;-

1. The introduction of criminal sanctions for all corruption-related offences.

2. Strengthening, professionalization and ensuring the independence of all institutions meant to combat corruption including the National Prosecution Authority, Zimbabwe Anti-Corruption Commission, Zimbabwe Republic Police and the Judiciary.

3. Declaration of assets by all public office bearers and senior public executives including those in State Enterprises.

5. Introduction of limited terms of office for senior public executive offices including heads of parastatals.

Behold the New. Change that Delivers!