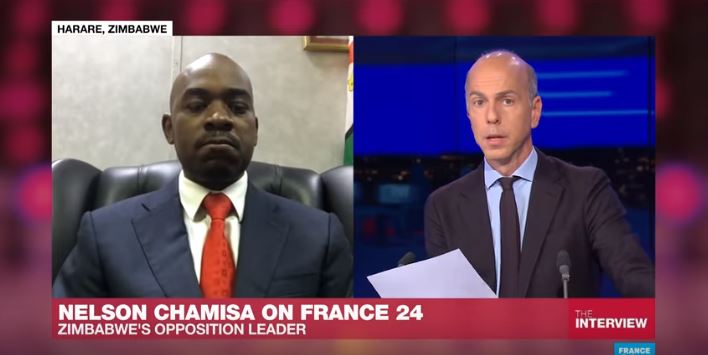 MDC president Nelson Chamisa said that President Emmerson Mnangagwa is out of touch with reality.

Chamisa said this while speaking to a French news channel, France24. He said:

Clearly, what Mr Mnangagwa is saying is an indication of how out of touch with the reality of what is happening in the country, he has chosen to institutionalise deceiving the world, deceiving the people and deceiving himself.

He dismissed allegations that his party was involved in the violence that took place in January after Mnangagwa unilaterally hiked fuel prices by over 150%.

Those are accusations by misplaced appreciation of the facts in Zimbabwe. We are very clear, we do not subscribe to violence.

The clarity, when we have looked at this issue, is that the problem in Zimbabwe, which we have seen, is occasioned by the deficits and omissions by government, particularly the price hikes of fuel by 150%, which was instituted by Mr Mnangagwa, is what then triggered action by citizens in a non-violent manner.

Of course, we had incidents of violence, which we condemned, which we do not subscribe to.