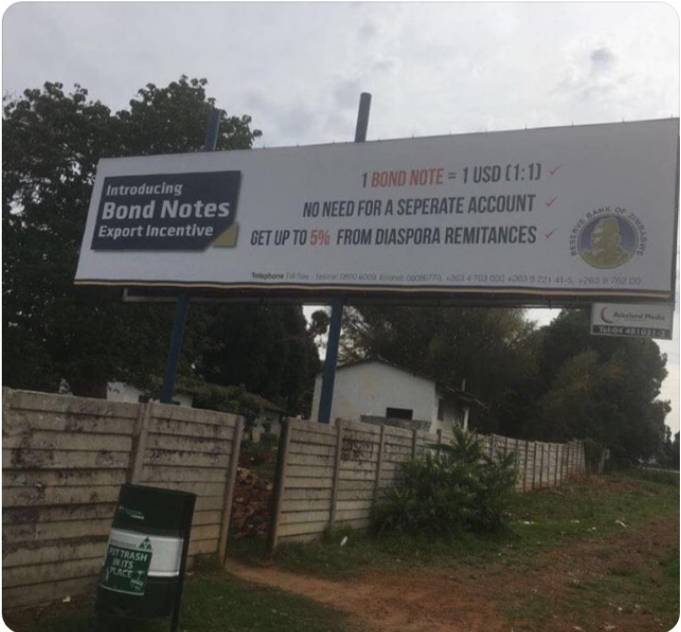 An opinion piece on technology publication Techzim explains how the government of Zimbabwe stole USD from its citizens using the Bond Notes:

Back in 2009, we had an almost pure money supply. For simplicity’s sake let us assume 100% of the money in banks was USD. The problem was that the Zimbabwean government fresh off from printing money during the 2008 era was hurting.

Their revenue collection efforts were bringing in about $4 billion dollars. Thanks to legacy debts, a bloated civil service, populist activities such as command agriculture and just plain old corruption that $4 billion could not sustain government expenditure to the levels that the ruling government wanted over the years. At some point, they could not even pay civil servants at once.

Faced with such a crisis the government could not print money in the traditional sense as the USD was now the primary currency. They were however in charge of the RTGS system. So they proceeded to send RTGS dollars to for example the bank accounts of civil servants. Whenever these civil servants withdrew money they were taking real dollars deposited by others.

As this continued to happen month after month the ratio of real USD versus RTGS dollars continued to decrease. This created a liquidity and cash crisis. You see RTGS dollars are invisible, you cannot actually touch and carry them around. As these continued to replace real USD there were no longer enough real USDs to meet people’s withdrawals. People were now spending hours in queues as they waited to get their hands on real USD.

Faced with such a crisis the government decided to make real RTGS dollars in the form of bond notes to ease the cash crisis. Pegged at 1:1 with the USD and backed by the ever mysterious African Export-Import Bank loan the bond note appeared. The reason given for us getting bond notes instead of getting the real USD from this bank was that people would externalise real USD while the bond notes could only be used in Zimbabwe.

The facility was supposed to guarantee the value of the bond notes. If I were to guess, I would say if this facility indeed existed, the government went and plundered it too while we were not looking. It’s the reason why the governor did not bother to mention it when he, in essence, devalued the bond note.

The RTGS balances continued to grow and the USD balances to shrink despite the government claiming the two were equal. In fact, the only reason they put up with the charade for so long was because they wanted to expropriate people’s real USD at a favourable rate. The most shocking thing for me was the claim by the RBZ governor at some point, that he didn’t know where the RTGS dollars were coming from. Now that is pretty low even by RBZ standards.

Now here we are, poorer and relieved of our USD. The only reason why this is legal is because the Zimbabwean government likes to make laws that will shield it from accountability.

One Comment on “How The Government Stole US Dollars From Zimbabweans”