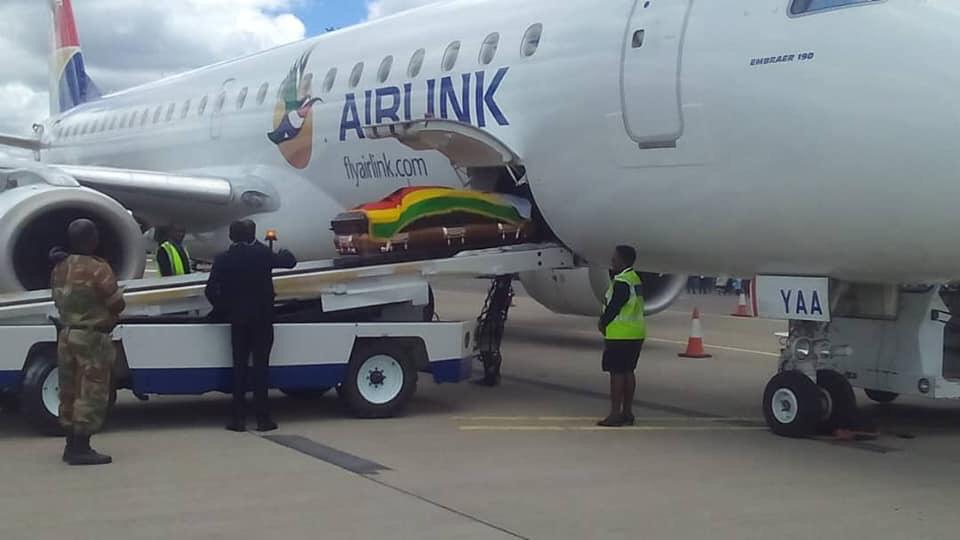 A picture of a coffin covered by the Zimbabwean flag being offloaded from a plane is that of former Cabinet Minister, Professor Callistus Ndlovu, who passed away in South Africa last week.

Ndlovu’s body arrived in Bulawayo yesterday ahead of burial at the National Heroes Acre in Harare. Ndlovu (83), who was also Zanu-PF’s Bulawayo provincial chairman and Central Committee member, collapsed and died on Wednesday last week in South Africa where he was being treated for pancreatic cancer. He was declared a national hero.

A funeral service was held at Doves Funeral Parlour before his body was taken to his home in Kumalo. It was taken back to the parlour in the evening after another funeral service. Today mourners will be gathered at the late national hero’s Kumalo residence. Ndlovu’s body will be airlifted to his Brunapeg rural home tomorrow and will be returned to Bulawayo on the same day. On Friday, a funeral service will be held at St Mary’s Cathedral Basilica — Roman Catholic Church at 8.30AM. From 10AM to 12PM, another service will be held at the Large City Hall and after that the body will be airlifted to Harare at 2.30PM. Ndlovu will be buried on Saturday at the National Heroes’ Acre.

Callistus Ndlovu was a politician and Zanu-PF member. He was also a former Cabinet Minister and the Zanu-PF Bulawayo Provincial chairman. He died on 13 February while receiving treament for an ailment in South Africa. He was declared a National Hero and buried at the... Read More About Callistus Ndlovu