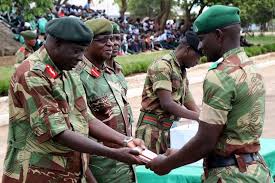 On Tuesday, a circular by the Commander Defence Forces dated January 2018 was revealed. It reads in part:

The Commander Zimabwe Defence Forces has approved the ZDF Fraternisation Policy that is aimed at addressing current challenges where officers and non-commissioned members marry and violate the tenets of good order and military discipline.

… Those who were already married prior to the promulgation of this policy are given six months from February 1, 2019, to comply with the requirement, failure of which action will be taken in terms of the policy.