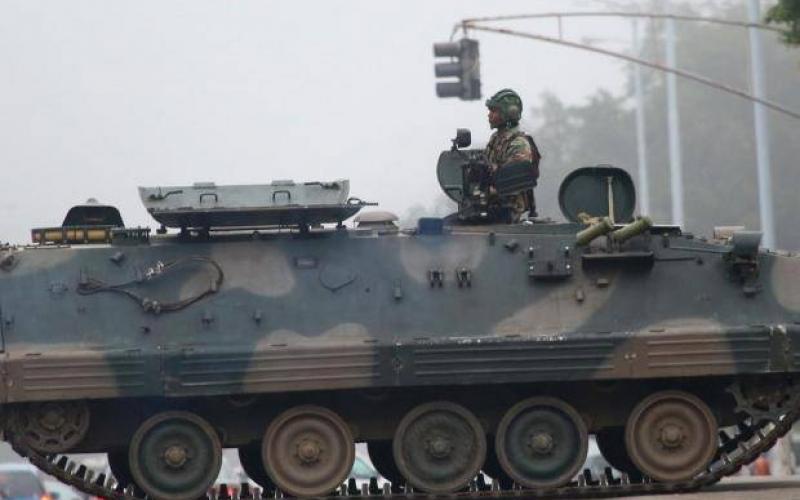 I promised this thread thru which I share what I call “coup minutes” which give us an idea why the army took over power in Zimbabwe in Nov 2017 & continue in control up to today.

Before sharing coup minutes, I want to draw attention to a recent article by George Charamba in the Herald of 06 February 2019. Charamba was secretary to the soldiers who staged the coup and his signature is appended to the “coup minutes”.

In the Herald article, Charamba claims “carriers of Operation Restore Legacy (coup) are all Zanu-PF cadres to the bone” & that the coup was “motivated by the need to checkmate the alien G40 in order to rescue the party (Zanu-PF) & its govt”.This is consistent with coup minutes.

Just as Charamba declares in the Herald article of 6 Feb 2019, the soldiers who staged the coup feared takeover of Zanu-PF by G40 would impact on “electability of Zanu-PF in the 2018 elections”. Out of 15 concerns the soldiers had,13 directly had to do with Zanu-PF, the Party.

On this page, the soldiers clearly state that the coup “was meant to prop up the authority of the president & buttress his constitutional roles in running the affairs of the Party, Zanu-PF, & the nation of Zimbabwe.”

Page 7, like many sections of the coup minutes, contains the major reason for the coup, “threatened electability of Zanu-PF in the impending 2018 harmonised elections” which raised “the spectre of an electoral defeat” similar to 2008.

Page 8 tells us that the coup was also meant to enable the military to “reinstate bonafide party (Zanu-PF) processes for legitimate outcomes (at the extraordinary congress in Dec 2017). It was meant to reinstate ED who had been fired.

On page 9, the coupists claim their coup was meant to avert ‘a tribal war,’ “Hondo yemarudzi” which they argued, “posed a real threat to National Security & overall electability of Zanu-PF “.

Page 10 reveals that the coup enabled the military to takeover Zanu-PF & govt so the soldiers could fulfil 2013 Zanu-PF “unfulfilled” election promises because “the command element expressed fears that Zanu-PF faced another election without evidence of real economic recovery”.

Page 11. The coup was a result of the unhappiness the soldiers had over sidelining of war vets from both Zanu-PF & govt. They were angry that “even veteran commissars seconded to the party by the military were dropped or sidelined”.

Page 12 Command element wasn’t happy with the way Zanu-PF National Commissar, Saviour Kasukuwere, “was executing commissariat work”. The army expressed concern over the perceived influence that @ProfJNMoyo had on the Commissar.

The soldiers staged the coup bcaz they were unhappy with what they called “the culture of open disrespect of seniors (@edmnangagwa) in the party” (Zanu-PF) shown at “interface rallies”.

Page 14 shows the soldiers carried out the coup bcaz they were not happy with the “integrity & management of information & decisions of the party” (Zanu-PF) which they said were being communicated through social media.

The command element staged the coup bcaz of “growing anxiety… arising from well-publicised threats of dismissal or arbitrary retirement”. In short, the coup was to save their jobs.

Page 16: The soldiers, whose terms of office had expired, argued that the 2013 constitution “gave everyone occupying such constitutionally abridged posts a new countdown date” hence couldn’t be retired.

Page 17: The soldiers staged the coup caz they were not happy with the collapse of the “National Joint Operation Command” (JOC), allegedly, at the instigation of G40. They blamed Chihuri & Bonyongwe for its collapse.

Page 18 The soldiers threatened a “bloody” war if “a counter-operation led by the police” resisted their coup.

Page 19: The soldiers lied that they were not staging the coup to effect leadership change at the top echelons of Zanu-PF although they argued: “hard decisions… had to be made in the interest of the survival of the party.”

Page 20-21: The soldiers expressed anxiety over who was to succeed Pres Mugabe “should he choose to retire” & claimed “hard decisions had to be made “whilst there is still time “…” for the survivability of Zanu-PF “…”into the future.”

Conclusion: The coup minutes correctly show that the Nov 2017 coup had nothing to do with the welfare of Zimboz but the worry the military had over a seemingly certain 2018 Zanu-PF electoral defeat. As Charamba puts it “the carriers” of Coup are “Zanu-PF cadres to the bone.”