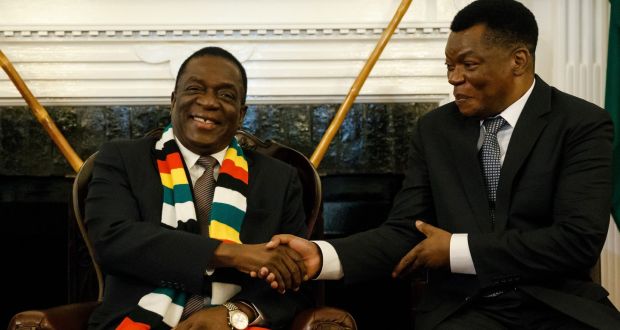 The director for economic crimes in the NPA and a former chief law officer Chris Mutangadura has been demoted for alleged links with former President Robert Mugabe, ZimLive.com reports.

Mutangadura was on February 7 advised by the newly appointed Prosecutor General, Kumbirai Hodzi that he had been transferred to Guruve. In a letter addressed to Mutangadura, Hodzi wrote:

You are hereby informed that with immediate effect you are transferred to Guruve National Prosecuting Authority Station. You will be taking instructions from there. All your work to be properly handed over to the National Director of Public Prosecutions for further action.

Chris is under no illusion that this ‘transfer’ to rustic Guruve is, in fact, an attempt to force him to quit. Hodzi personally dislikes him, their beef is historic from the time the new Prosecutor General was Deputy Attorney General.

There has always been a perception Mutangadura was loyal to former President Mugabe and had prevented political prosecutions of officials from the so-called G40 – the arch-nemesis of current president Emmerson Mnangagwa.

Hodzi was appointed the PG by President Emmerson Mnangagwa even though he came number 6 out of 10 in interviews for the post conducted by the Judicial Service Commission.