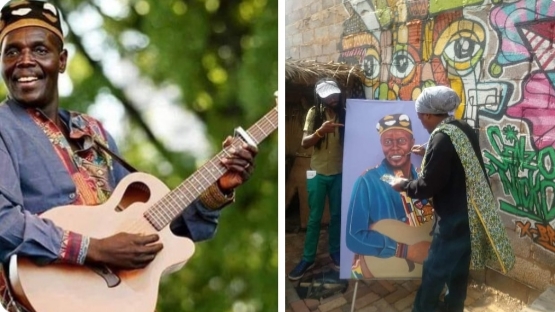 In an interview with The Standard, South Africa-based artist Lebani Sirenji, popularly known as Rasta, responded to criticism of his painting of Oliver Mtukudzi.

Sirenji has been criticised for painting portraits of dead celebrities and it is his recent work honouring Mtukudzi which got many social media users angry. Social media criticised the artist for doing a portrait which doesn’t resemble Mtukudzi. However, Sirenji said people do not understand his paintings. Said Sirenji:

My paintings are more than just visual art. It’s a movement, which moves one’s mind to have faith and hope in life. People have mixed feelings over my art because art is done in different ways and many of the pictures that have found their way onto social media are pictures of half-done portraits. People criticise me before the final product which will excite them is not yet out. The people on Twitter have no mercy and are too quick to judge, they don’t know my goals. Even a soccer player may falter and get booed, but come back stronger in the next match.

Rasta said he wants to finish Oliver Mtukudzi’s potrait because when he met the late musician at Bra Hugh Masekela’s memorial last year, he encouraged him to continue doing his work. He said he wants to present the painting and give it to Mtukudzi’s family.

Hugh Ramopolo Masekela was a South African trumpeter, flugelhornist, cornetist, composer and singer.Hugh had Zimbabwean roots as his genealogy could be traced back to Zimbabwe. He is regarded the "father of South African jazz." Masekela was famous for his jazz compositions and for writing popular... Read More About Hugh Masekela