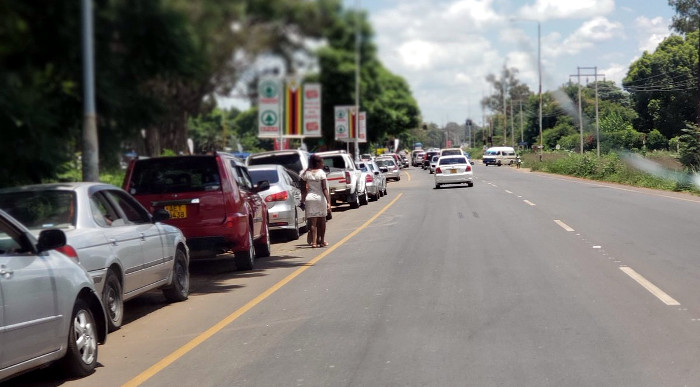 Despite assurances that the situation has returned to normal, Zimbabwean motorists are again experiencing log fuel queues in the country. Several car owners complained since Friday that they are having to queue long hours for fuel.

Here are some pictures that have been shared:

1Feb.'19 4:50pm Zim. time fuel queues've resurfaced including one in Msasa #Zimbabwe. Said a citizen in that queue, ‘[There’s an armed soldier] I couldn’t get fuel at Total Airport, Total Coronation & Total Churchill Roads. Zuva Rhodesville was like that as well’ @1changamire pic.twitter.com/2BYqLjH9Vg

Regardless of the price hike remedy to the fuel shortages, the queues are back. How draining is this 🤧🤧 pic.twitter.com/bXZHh0R8jy

The Zimbabwe Fuel Crisis of 2018 - 2019 is a shortage of Petrol and Diesel that started at the beginning of September 2018. At the end of October 2018, the crisis ended briefly after the government negotiated fuel supply agreements with Sakunda (part of the... Read More About Zimbabwe Fuel Shortage Crisis (2018 - 2019)