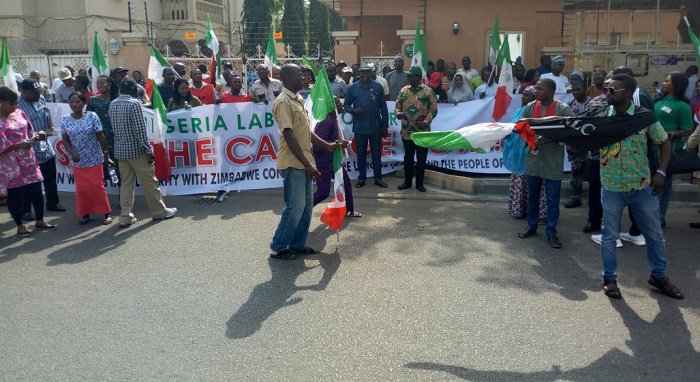 Reports from Nigeria indicate that the workers were demanding the immediate unconditional release of workers and labour leaders arrested during the ShtDownZim campaign.

President of the NLC, Ayuba Wabba warned that if the Zimbabwean authorities failed to release the ZCTU leaders, his organisation will mobilise workers across the world to shut down Zimbabwean embassies worldwide.

…the protest is against what many Zimbabweans perceive as insensitive policy choices by the government of Zimbabwe. The Nigerian working class family is sad that what should have passed as a civil action in democratic climes was met with disproportionate use of force by the Zimbabwean military and security forces.

The NLC is particularly concerned about allegations of home raids, killings, rapes, robbery and physical assaults against workers, women, children and civilians generally, during the so-called crackdown of protests by the Zimbabwean security forces.

The government of Zimbabwe attracted a lot of condemnation after it deployed heavily armed soldiers to deal with protestors. More than 12 people reportedly died, most of them from gunshot wounds.