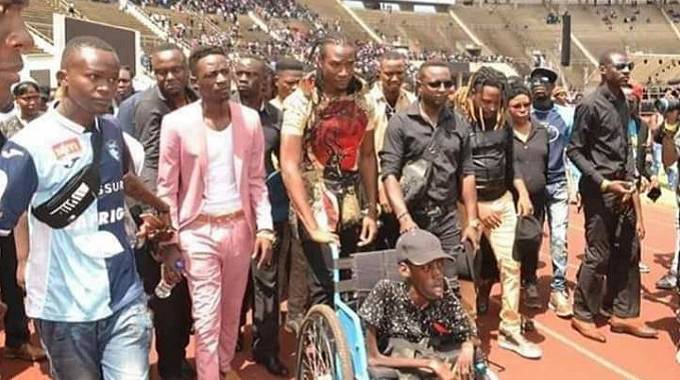 Mai TT said Jah Prayzah pretended to be a caring artiste at Tuku’s tribute concert when he rushed to push Greatman’s wheelchair. She said the act was a publicity stunt. Mai TT said Jah Prayzah turned down a request to work with Greatman. She said the only person who was willing to work with the Mhangura based musician is Sulumani Chimbetu. Said Mai TT:

I thank Sulumani very much for intervening as he is the only artiste who responded positively towards Greatness. May God bless him and I would not have been surprised or angered that day to see Sulumani pushing Greatman that day or even one of my fans from the UK who bought him a wheelchair who was there on that day not Jah Prayzah who was doing it for his public relations yet off the cameras they are a no show.

Sulumani Chimbetu is a Zimbabwean Dendera Music vocalist, guitarist, composer, stage performer and businessman. He is the frontman for the Orchestra Dendera Kings and son of the late Dendera music icon Simon Chimbetu. He first came to the public's attention in 2004 when he joined... Read More About Sulumani Chimbetu