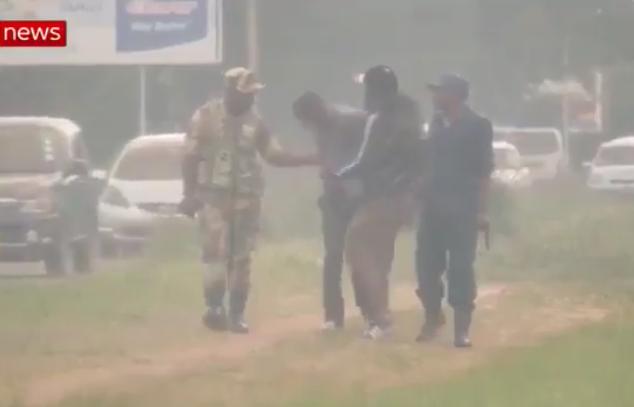 Various opposition political parties in Zimbabwe’s body politic have condemned President Emmerson Mnangagwa for saying that he was ‘appalled’ after seeing security forces brutally attacking a man in handcuffs.

Mnangagwa wrote on his Twitter page on Monday Morning:

I was appalled by today’s Sky News report. This is not the Zimbabwean way. I have instructed that the individuals behind this be arrested and encourage all those impacted to contact the authorities and file an official complaint.

It’s like they (Mnangagwa and his government) are suffering from a split personality disorder. One day they smile and the next day they bite, maybe they take their nicknames (Crocodile) literally.

… who are these men in the military and security forces who brutalise fellow citizens and continue to curse our land by spilling blood?

My hat off to John Sparks and Sky News for the courageous reporting that exposes not just the brutality of the current regime, but the cowardice and hypocrisy of pastors, prophets, journalists, feminists etc who won’t speak out on behalf of the oppressed and abused to protect their political relationships and their place at the feeding trough.

The spokesperson for the MDC-T, Linda Masarira had this to say:

We do not expect a whole executive president to wait for Sky News yet most of these things were being recorded daily by local media in the country.

We need to have a President who is concerned about the welfare of his people because it is the people of Zimbabwe who voted for him to be President of this country.

We expect him to also listen to what the local media are saying to come up with tangible solutions to the demise and the crisis facing the nation.

We are tired of cheap talk and we expect him to show leadership to ensure peace and make sure that all the soldiers are contained back in the barracks where they belong.

We need just we need peace and reconciliation and we expect the Zanu PF lead by example and show that there is indeed the second republic and not an extension of the Robert Mugabe regime.