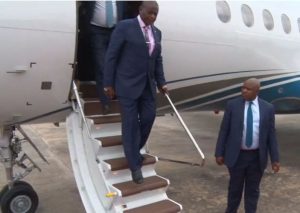 Vice President Constantino Chiwenga is in Kinshasa for the inauguration of the DRC President-elect Felix Tshisekedi, where proceedings are underway.

Tshisekedi is being sworn in as the President of the DRC, following the December 30 harmonised elections.

The President-elect surprised many when the over 60 million Congolese put their trust in him, winning over 38 per cent of the vote, beating two other fierce contenders, Mr Martin Fayulu and Emmanuel Ramazani Shadary from Kabila’s party.

The DRC election was marred with controversy. Not only was it delayed for two years, but reports indicate that the main opposition leaders such as Moise Katumbi were barred from running and thousands of voters were disenfranchised.

Moreover, the main losing presidential candidate cried foul over the manner in which the elections were held and accused the local electoral body of massive fraud.

One Comment on “Chiwenga Arrives In Kinshasa, DRC For The Inaguration Of New President Felix Tshisekedi”