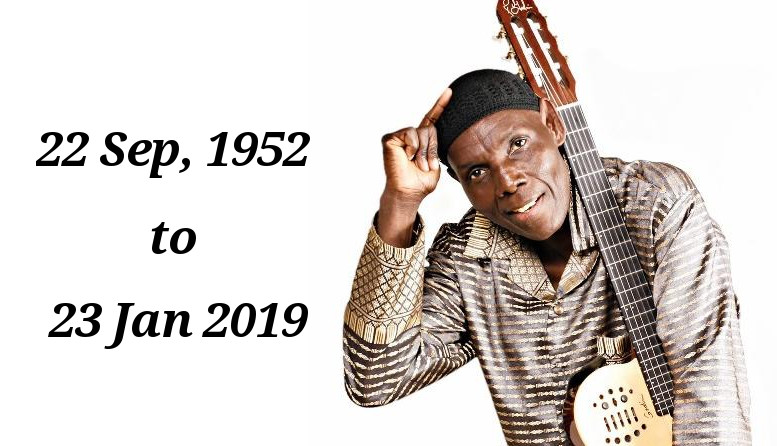 Oliver Mtukudzi, the legendary musician has just died. As the news spread, Zimbabweans on Twitter expressed their grief and sadness.

Below are some of the notable reactions to the musician’s deaths:

Shocking that ZTV is busy playing Mukadota while SABC has dedicated close to 30 mins celebrating @TukuOfficial …Some things have to change @nickmangwana pic.twitter.com/4qZcqbBexj

The Gvt of Zimbabwe is deeply saddened by the passing on of Dr Oliver Mutukudzi, a great patriot who united us through his music. HE President Mnangagwa will determine what kind of honour will be accorded to him be it state assisted funeral or otherwise. Will keep you informed.

RIP Oliver Mtukudzi. Your contribution to the local music industry shall forever be cherished. pic.twitter.com/0ZRQzJVadN

In 1991 l won a singing Competition at the Sheraton hosted by Allan Riiddell and a lovely Presenter called something Nyirenda(Surf have A Go show) after I sang a TUKU song called Gurwe.That was my entry into the music industry. TUKU was a great guy who helped me a lot @i_sibanda pic.twitter.com/AcGJI9RnL4

A true African hero & a big tree has fallen

Not burying him there makes the shrine meaningless

Music icon Oliver Mtukudzi has died at the age of 66. He reportedly passed on at the Avenues Clinic in Harare this afternoon after being ill over the last month. MHSRIP! pic.twitter.com/A4UfXrTY9m

It is a well-known fact that our national shrine is reserved for political figures. But given his almost unparalleled contribution to the upliftment of our nation's image, #OliverMtukudzi would make and should be made a great exception to that general rule. pic.twitter.com/BftHH7QqiH

When Tuku made the cover of TIME magazine, March 2003. #TBT pic.twitter.com/WZtMNjmDNC

Gvt conveys its heartfelt condolences to the Mtukudzi Family on the sad passing on of Oliver "Tuku" Mtukudzi today at Avenues Clinic. Zimbabwe music is poorer without our music legend. MHDSRIEP. pic.twitter.com/zf2pnL9pDB

One of the most touching Tuku videos. Now the legend and the son rest. Sad day. @HStvZim @263Chat #RIPTuku pic.twitter.com/98NhKgpirj

I’ve learnt with great sadness that our legend #OliverMtukudzi has died. We grew up on & lived with his beautiful music. A truly gifted man, #TukuMusic is also a story of our nation. His voice soared across seas & continents. We were privileged to witness greatness. #RIPTuku pic.twitter.com/hlN2JLEn5n

There is no doubt @TukuOfficial has been a uniting force in Zimbabwe and beyond our borders. @edmnangagwa and gvt should honour this icon with a National Hero status & break the old regime's entitlement on the awarding of hero status….some things just have to change pic.twitter.com/6lWUW2qr9q

You were the soundtrack to an entire generation and a rare gift to Zimbabwe.

We will always love you, a legend and hero. pic.twitter.com/qhPBabPEyS

The Great Elephant sleeps but lives on in his music. pic.twitter.com/0pVMP75G8K

Rest in peace Oliver Mtukudzi. If anyone ever made me proud to be #Zimbabwean it was you. Thank you for making us happy for so long, especially during the darkest days. pic.twitter.com/K5gsugnb2f

Blessed to have been born in your generation SaManyanga #RIPTukuhttps://t.co/vQJWwvRhOX

After 44 years of making music, and with a rich discography of 67 albums to his name, icon Oliver Mtukudzi has made his final bow from the stage at age 66 pic.twitter.com/m9TcMCx9Uh

I have it on good authority that Dr. Oliver “Tuku” Mtukudzi is no more. We’ve lost an icon & my heartfelt condolences to Daisy&family. I’m writing to the President to apply for National Hero status for his national contribution to the music, arts & culture industry. MHDRIEP 🙏🏾 pic.twitter.com/RfnVSr8oUY

A legend. Thank you for the music, the effortless idiom, the enchanting rhythms, the remarkable artistry. Oliver "Tuku" Mtukudzi. pic.twitter.com/T52MeYrjii

And a tree has fallen…. Rest in power @TukuOfficial SaManyanga… We have been robbed of a legend… Who are we to say NO pic.twitter.com/QqXCsYykn3

22 comments on “Update: How Zimbabweans Are Reacting To Oliver Mtukudzi’s Death”