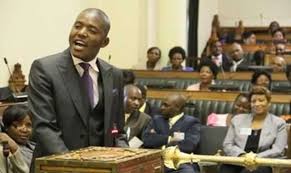 Former G40 kingpin Jonathan Moyo who now lives in self-imposed exile warned Justice Mayor Wadyajena that an alleged plot to dethrone President Mnangagwa is not over yet. Wadyajena said that a plot hatched by senior ZANU PF figures to impeach Mnangagwa has failed. Writing on Twitter today, Moyo said:

When an insider with vested political & nepotistic interests in the incumbent declares that a coup plot has failed when key others are mum, take it with bags of salt. It’s not over until it’s over. Recall my “Zete Moment” the night of 13 Nov 2017 when I knew a coup was underway!

While responding to another Twitter user who disputed Moyo’s assertion that he knew beforehand that the November 2017 military putsch was afoot, he said;

So you wanted me to tell you that we knew what you bastards were up to; so that you could kill us & our sources in advance of your evil power grab whose brutality is now being visited on all Zimbabweans? If you & your lot really believe that, then you’re indeed idiots after all!

Reports over the weekend suggested that disaffected senior ZANU PF figures not happy with how Mnangagwa is handling national affairs had devised a plan to have him impeached. As a result, Mnangagwa abandoned his plans to attend the World Economic Forum in Davos and rushed back home to deal with the crisis.