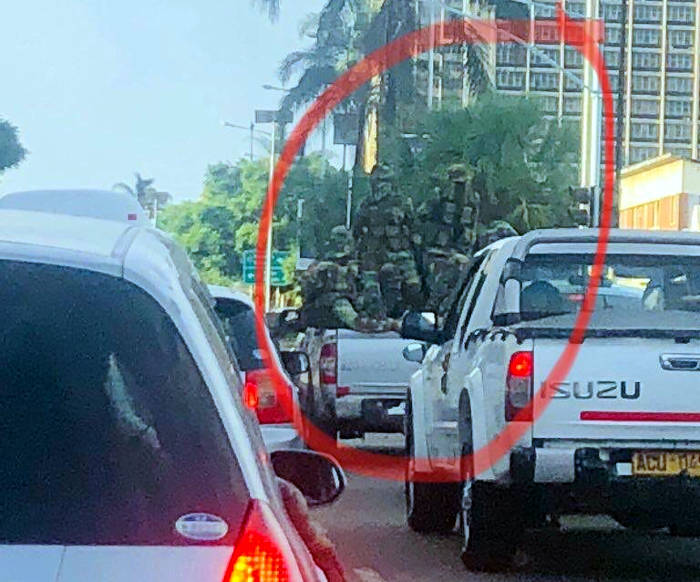 This evening, The Zimbabwe Republic Police and the Military addressed a joint press conference where they claimed that civilians stole their uniforms. The two security arms asked that the uniforms be surrendered.

Below are some of the reactions to the statement by Zimbabweans on Twitter:

"Civilians must surrender all police and army uniforms in their posession." But is this the most important announcement for the police & army to make after killing 12 protesters & inflicting gunshot wounds on 70 others? Police & military uniforms come from your depots & barracks

When does a deserter calmly hand over his uniform without being charged for desertion. This is a tacit admission that something is going very wrong in our armed forces. https://t.co/ot2Q8RMOpm

As for those jailed for inciting violence..is the idea that they incited gangs (apparently arrested on Jan 14 for prior roberries) & deserters?

Caused by deserters of the army and policy who after leaving used police and army uniform to commit such atrocities🤷🏿‍♂️. It beats me

So there was just joint presser from the army and police. The main point is that there are civilians wit army regalia. The point is that where it had been said that police and army beat residents, strike out and insert civilians clad in army or police garb. It was not us

According to ZDF & ZRP, civilian criminals who stole military & police uniforms are the ones who have been committing acts of terror against you.

They should also ask them to return official army vehicles they were travelling in.

The army cannot dodge responsibility for the violence by claiming that army disseters carried crimes against humanity. This is a pathetic attempt. Those people who were looting and burning properties are serving units of the Army under Mnangagwa @edmnangagwa and General Chiwenga

Deja vu….lets say its the citizens again shooting each other at 45 degrees angle or maybe MDC snipers😩😩

Imagine. These guys will never admit to their wrong doings

Stuff like this will have us shut our own indanets. https://t.co/aDlU239ju8

The simple question they avoided – When, where, how & why did these civilians get police & army uniforms?