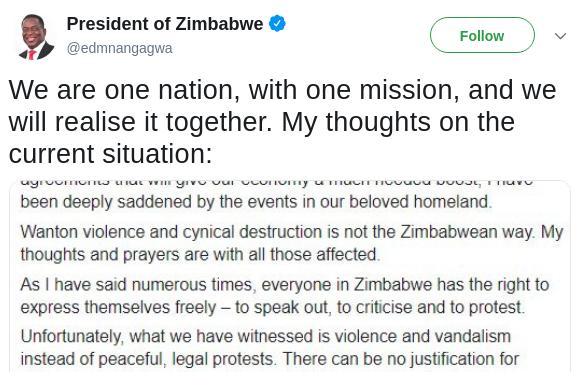 The president today afternoon issued a statement on the civil unrest of 14 January and his current international roadshow. The president used Facebook and Twitter to issue the message despite that the two platforms  are currently still blocked in Zimbabwe. He said that Zimbabweans are free to protest and that they should do it peacefully. He also said that he is currently on an international roadshow to seek much need investment.

Here’s how some Zimbabweans on Twitter reacted to his statement:

President the people of Zim can't hear you there have no access to internet at the moment. https://t.co/KdrrkQ3VMh

Mr President, are they plying you with cheap vodka in Moscow? What nonsense is this? You send out the army to unleash disproportionate force yet again, raising body count to over 10 in 6 months! You shut down internet then talk of free speech?

I would appeal to your better angels but the events of the last few days make me doubt whether they exist. You’ve confirmed that you care more about how your international image than the plight of the people.

You have failed the Zimbabwean people. https://t.co/3KG2JNv7KX

No chief! You can't block internet for Zimbabweans and then be using free East European WiFi to communicate to the same people https://t.co/N2LBYlQvnw

The Internet is #ShutdownInZimbabwe. How will the citizens receive this communication? Didn’t we advise against this ill fated trip after reading the mood in the country? https://t.co/IJ51vzR6Kg

How do you know that your gvt needs a shrink? Simple. During the time when the same gvt had shut down internet to quell protests, the President issues a statement on twitter and other social media platforms from Russia addressing the nation. @ProfJNMoyo @ pic.twitter.com/oJDXQwXgCc

Its difficult to say "We are in this together" while they are here☝ pic.twitter.com/KXiOLkoI5b

Your failure to call to order your rogue military & police is an abdication of your constitutional duty in light of the killings & torture of civilians, destruction of homes & property by marauding soldiers, police & ZanuPF militia under the cover of an illegal Internet shutdown! https://t.co/uFuNyrM44Z