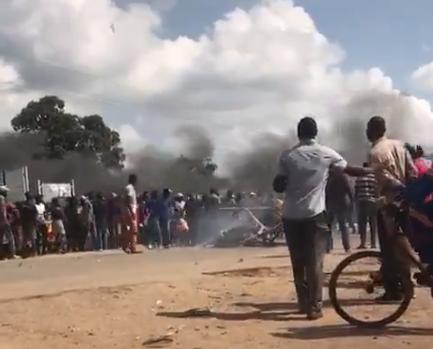 The #SHUTDOWNZIM mass stay-away called for by the Zimbabwe Congress of Trade Union (ZCTU) has spread like an Australian wildfire across the country. The stay away has since degenerated into protests in the country’s major cities.

In Harare, there are reports that roads have been blocked in high-density areas like Epworth, Chitungwiza, Mabvuku and other areas.

Riot police had to move into Epworth and Mabvuku where protestors were blocking roads with stones and burning tyres. Choppies Mabvuku has been looted clean earlier today.

Some businesses in the CBD, however, opened as usual while others were closed. Lyons was sending its workers back home. big retail outlets like Bon Marche, OK First Street, Pick N Pay Jason Moyo Spar and Choppies were open for business.

In Bulawayo, fuel hike protests turned into Mnangagwa must go demonstrations as people poured into the city’s CBD.

Riots started in the morning around 7 am and are still ongoing in different suburbs like Phelandaba, Emakhandeni, and Mpopoma.

In Karoi all shops were closed in Chikangwe and Chiedza high-density areas. Six police officers were said to have been deployed at Chikagwe bus terminus.