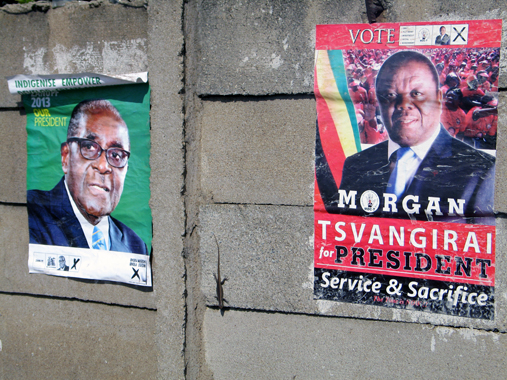 For purposes of populating the public record and to avoid the danger of the single story, allow me to share my observations regarding election funding in 2013. I make no claim that my version is the exclusive truth, no.

In 2013, ZANU PF was pushing for an early election. It was desperate to avoid implementation of electoral reforms after the success of the constitutional referendum in March. The sooner elections were held under the old order the better. The problem was there was no money.

We (MDC) saw this as a chance to push for reforms, 1 of which was having international election observers. Recall that the international community had funded a large chunk of the constitution-making process via UNDP? They were also ready to help with election support.

Mugabe agreed in principle but stalled. A team of pre-election assessors was unceremoniously stopped en route to Harare. ZANU PF figured out that a role for the international community would come at a price: a role for them as election observers. It didn’t like this scrutiny.

So ZANU PF scrounged for local funding to avoid the external eye on elections. We thought they had diamonds’ money but the looters were too greedy to share with the treasury. Then they identified mobile telecoms companies, whose licence renewals were soon due.

The fee is paid to Potraz, the regulator, which falls under the telecoms ministry, the under ZANU PF’s Goche. I don’t know the nitty-gritty but soon Mugabe said we had enough funding & therefore didn’t need UNDP help. That effectively shut the route for the observers.

We soon learnt that they had managed to squeeze $85 million out of one mobile company. The other two did not pay a penny. They are now both state-owned & I’m not sure they have paid, a source of unfair competition with their rival which had to pay while they didn’t.

The irony, as I pointed out a few years ago, is that the licence fee payment had (perhaps unwittingly) assisted ZANU PF to avoid international observation which would have been part of the international funding package. I don’t blame the company at all – the fee wasn’t a choice.

This is how things unfolded from my perspective. It was a game of political chess & ZANU PF managed to play a strong hand. The company could not refuse to pay because the fee is a legal duty. But hopefully & maybe it used some leverage to negotiate a good deal for itself.