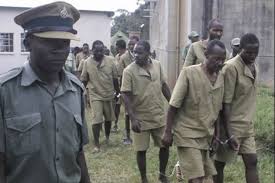 The Zimbabwe Prisons and Correctional Service (ZPCS) has revealed that the second of three prisoners who jumped off a moving vehicle transferring four inmates from Harare to Hwahwa Prison in an escape bid has died. ZPCS spokesperson Simon Kawondo said:

He sustained serious injuries when he jumped off the moving truck around the Lalapansi area and he died at Gweru General Hospital. The first died on the spot, but the third is still at large.

The ZPCS has warned the public not to effect a citizen arrest on the missing prisoner he is considered dangerous but to inform the police of his whereabouts.