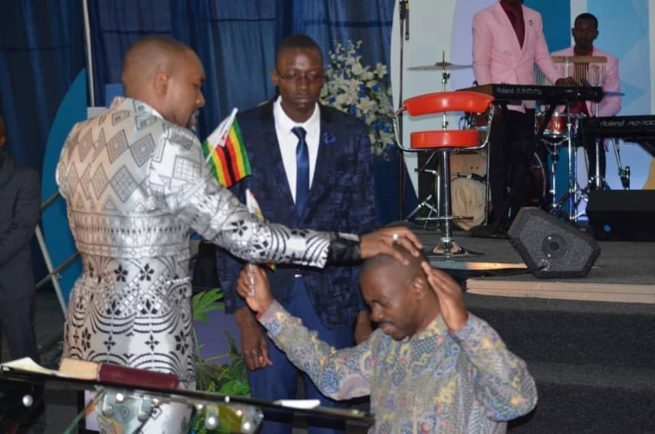 Bulawayo Cleric and Founder of Faith In God Eagle Life Assembly, Prophet Blessing Chiza gave a prophecy to the effect that MDC president Nelson Chamisa shall become the President of Zimbabwe. A Zimeye report claims that Chiza told Chamisa that he shall come across obstacles in his path, but shall overcome. Part of the report reads as follows;

The Lord said, there is a man whom God is raising; a young president who shall bring economic and spiritual revival in Zimbabwe in God’s time and the Lord showed me his inauguration in the National Sports Stadium. For God to confirm, when it is the time for that inauguration, heavy rain is going to fall. And this man’s first name starts with an N and a surname which starts with a C. Initials are N.C. He shall be put by God.

Demons will try many things to stop his presidency, trying to change presidential age limit/ to arrest/ death/ but finally, he shall be inaugurated. Demons can sense his favour and moment hence they will panic. President Mnangagwa has his time and we honour them and their dispensation with his Vice-Presidents but this N.C’s time is coming just as their time came. (Zechariah 4vs6) Read it to people. He is going to come by God’s power.

I hear some say this N.C will never rule Zimbabwe because he is young. But the Lord is saying they are saying out of their fleshly desires but God Himself shall shock many. When God says yes, no man can say no. He will be in power. Not by might/ not by the barrel. “His hands are clean”, says the Lord and God says I have anointed him for his time and his hands are clean. Coated in Minerals. Visionary leader 2020 mind. Anointed of God/ God fearing.

People shall leave diaspora to return to Zimbabwe when he begins ruling. In this time we shall see spaghetti roads, forex, nice buildings that you see in Hong Kong, Singapore and Indonesia. The main reason the man N.C is coming is for a spiritual revival which will see many people coming to Christ. He will make Zimbabwe great again and he will break demonic altars in Zimbabwe and we shall be the bread basket of Africa. There shall be a spirit of prayer in Zimbabwe that will sweep over the whole country.

You shall not hear of bloodshed again in Zimbabwe. Zimbabwe shall be a united, loving and peaceful country. His other name shall be Solomon and he shall reduce gold to be common stones (1st Kings 10vs27). During his reign, Zimbabwe shall discover a lot of minerals, employment rate will go above 70% (2nd Chronicles 1vs15/ 9vs27).

Soldiers, police, nurses, doctors, teachers and all people shall be smiling. There is a wave of peace that shall sweep over Zimbabwe. God has not forgotten Zimbabwe the question is when is his time, it can be any time, though it might be sooner, or nor sooner or later, or next election or before.