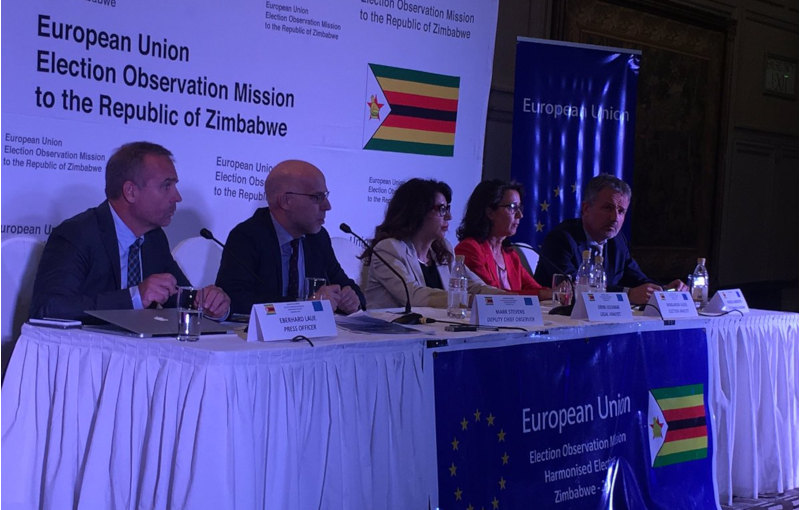 The European Union Election Observer Mission (EUEOM) has said that the July 30 Harmonised elections fell short of international standards as they final results lacked reliability and were not verifiable. This was said by EU EOM Deputy Chief Observer Mark Stevens on Wednesday when the mission presented its final report on the July 30 harmonised elections.

Presidential results announced by ZEC were based on figures from the provincial level. ZEC also provided a CD-ROM with polling station figures set out in excel format. As this was not a presentation of the actual V11 forms from each polling station, the CD-ROM did not provide the level of transparency, traceability and verifiability which was hoped for and which could have been achieved. Further, the figures presented by ZEC in the CD-ROM contained a large number of errors and inaccuracies. While these may not bring in to question the outcome per se, the errors do raise enough questions to have doubt as to the exact accuracy and reliability of the figures presented. The information provided by ZEC attests to a lack of quality control in its work, notably given that this was such a critical aspect of the elections. It is also notable that the provinces with the highest margin of votes in favour of the ruling party have been the areas with the highest number of reports of “smart intimidation”, misuse of state resources, involvement of traditional leaders and other electoral malpractices

When asked by Peta Thornycroft if the EUEOM had discovered any evidence that the elections were rigged, Stevens said,