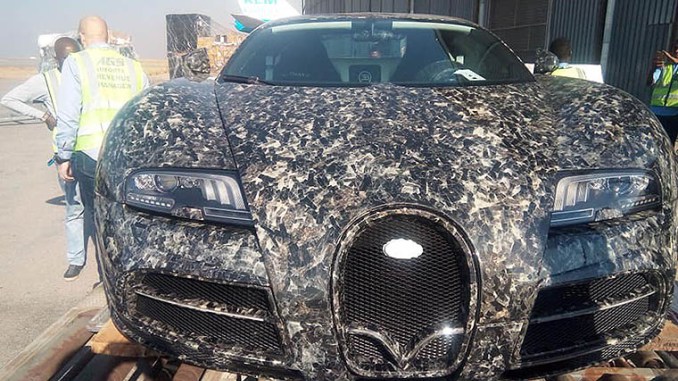 A $2 million supercar delivered to Zimbabwe last month is alleged to have paid $1.15 million in duty.

The 2009 Bugatti Veyron Fbg par Hermès edition was delivered by a KLM Cargo plane at a cost of $36,000.Bugatti sent a representative to supervise the car’s loading in the Netherlands, its off-loading in Harare as well as its delivery to its owner.

ZIMRA dodge, questions about the identity of the owner, and the amount of duty paid citing confidentiality. But employees at the Robert Mugabe International airport confirmed that the costs related to the acquisition and delivery of the car were broken down as: Euro 1.9 million (about $2.2m) to buy the car, Euro 31,000 ($36,000) to fly it to Zimbabwe and Euro 990,000 ($1.15m) for the duty.

We heard the owner is a Zimbabwean businessman, and that the car is staying in Zimbabwe.

The Zimbabwe Revenue Authority is a government department which is responsible for the collection of state revenue in form of excise duty, customs duty, road tolls, corporate and civil taxes. In addition, it also facilitates trade, offers fiscal advise to the government as well as... Read More About ZIMRA