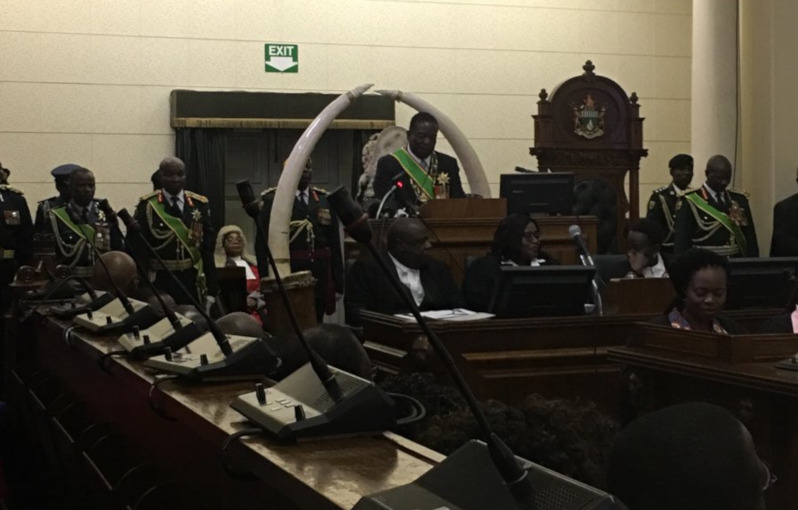 President Emmerson Mnangagwa on Tuesday officially opened the Ninth Parliament and delivered his first State of the Nation Address (SONA). During the President’s address, the opposition legislators walked out and only returned to their seats when the president was done. Here is the MDC’s response to the SONA which was issued by Nkululeko Sibanda, spokesperson for Nelson Chamisa.

For the ordinary Zimbabwean, struggling to put food on the table, the election now seems a distant memory. It has been overtaken by the realities of life, yet everything we are going through now was determined by that election and the stolen result.

Firstly, and unfortunately, the election ended with an imposed outcome. ZEC announced numbers that it could not stand by for any considerable period. Changing them every day. Then the Constitutional Court depended on the discreditable ZEC pronouncements, in complete disregard of figures. This produced a new reality. A Zimbabwe which is now run by a blatantly illegitimate government. The Mnangagwa Presidency has just one source of governing authority, which is his precarious hold of and capture of state institutions. This is how ZEC and the courts become very notable players in ensuring that only he would be President. The current president of the republic does not and will likely never enjoy the level of legitimacy that even is predecessor Robert Mugabe enjoyed in the earlier years of his rule over the country. This indeed is shameful for a government that has wanted to project itself as representing progress from Mugabe’s ruinous 37-year rule.

This government was not just rejected by the people of Zimbabwe, the economy rejected Mnangagwa with a sharp downturn after his inauguration. As if this was not enough, when he appointed his cabinet, the economy responded with a negative nod. This situation disregarded the splendid public relations stunt he performed in appointing two unusual names. He thought he had a poster girl and poster boy for his cabinet. As poster boy, for purchasing some legitimacy on the cheap, Prof Mthuli Ncube did not meet even the lowest expectation. The economy did not respond positively to his arrival. This is the same for the Honourable Minister Coventry. However, in every cloud there is a silver line, Minister Coventry has been the first to produce positive news in Mnangagwa’s cabinet. It is indeed great news that she will soon become a parent. We congratulate her, her husband and family. As Mnangagwa spoke on Tuesday, the Zimbabwe economy was in the intensive care unit. It needs to be rescued and its greatest challenge is that of an illegitimate government. To add salt to injury, individuals at the highest levels of this government are believed by many to be potentially some of the most corrupt people on earth. Although we are not making this allegation, we are saying that such perceptions are like a secondary infection on a patient who is already in an unstable condition.

This economy will need some oxygen in order for it to recover. An illegitimate president and government will not be able to provide the necessary confidence. Zimbabwe needs maturity and a bipartisan approach to leadership which would allow all hands to be on the deck. Zimbabwe requires a leader who would have been willing to be a statesman. Someone who could bring this country together, with one purpose, to unite and rebuild.
If we had not been cheated in this election, today there would have been no shortages and rationing of fuel. There would be no shortages of bread and pricing would have stabilised with a downward trend.

We were going to achieve this by following our smart policies that would have quickly allowed for all and the best brains to be working on the economy. Zimbabwe already knows that President Chamisa has a strong reputation for identifying talent and the best brains, from far and wide. A President Chamisa government would have stabilised the economy by engaging all political players to help give life to the idea of unity in building the economy. Putting everyone to work building our economy would have been the first job and first line for him.

The President would like to encourage the illegitimate President Mnangagwa to realise that he stole the election. Because of that theft, he was then declared President. Because of this, he must stop being in a perpetual campaign mode, one cannot govern like a candidate. He must become Presidential. His poorly read speech sounded like a rumbling stump away from the houses of parliament.

In the interests of our economy and our nation, this country does not need grandstanding and a self-serving attitude from its appointed president. The national post-election political agenda for political parties, business, church, labour, students, civil society and Zimbabwe must be the establishment of a national dialogue on the best way forward for the country, not a laundry list of irrelevant bills. Zimbabwe requires that all stakeholders adopt a cooperative approach, to give the economy some breathing space. President Chamisa’s government would have immediately adopted an all-stakeholder participation framework for government affairs and work towards unbundling party-government conflation. Zimbabwe should transform, prosper and create opportunities for her people. The current state of illegitimacy does not help the situation and Mnangagwa runs the risk of never obtaining internal political legitimacy.