The City of Bulawayo has introduced temporary water rationing in an effort to normalize the reservoir levels at Magwegwe which had been affected by erratic pumping from the Nyamandlovu Aquifer. The City of Bulawayo advises that places which will not have water for more than 24 hours will be supplied with bowsers. Here is the notice and the timetable,

The City of Bulawayo would like to advise members of the Public that there is an ongoing exercise to normalise Magwegwe reservoir level. The level has been critical for the past three weeks, due to erratic pumping from Nyamandlovu Aquifer. The boreholes have been affected mainly by power failures. ZETDC is working to restore the power supply and therefore increase the boreholes pumping to the city.

In a bid to manage water supply from the reservoir, Council would like to advise that there will be an emergency interruption of water supplies to the following areas fed directly from Criterion and Magwegwe Reservoir and some surrounding areas.

Please note that the program is subject to change if the reservoir level improves or deteriorates beyond critical level. All the high areas that are likely to be affected for more than 24hrs will have water supplied by Bowsers.

Residents are urged to conserve water until further notice. Bulawayo City Council wishes to apologise to its valued customers for the inconvenience caused. 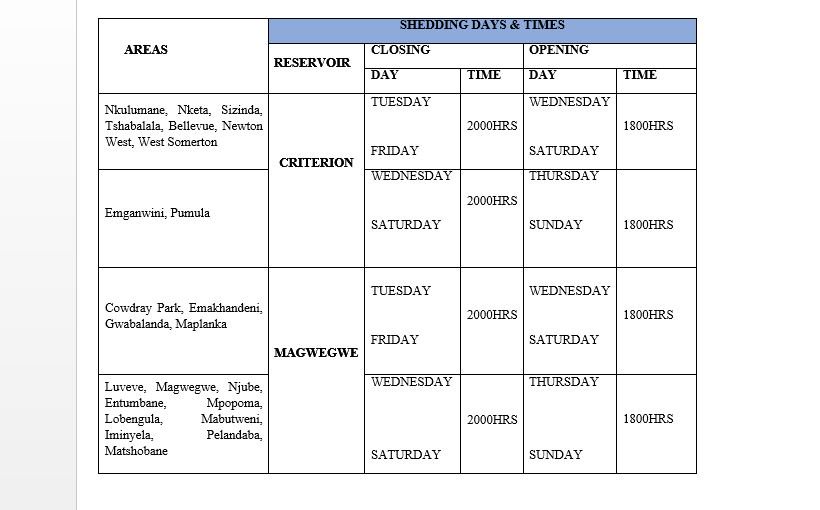 One Comment on “City of Bulawayo Introduces Temporary Water Rationing”