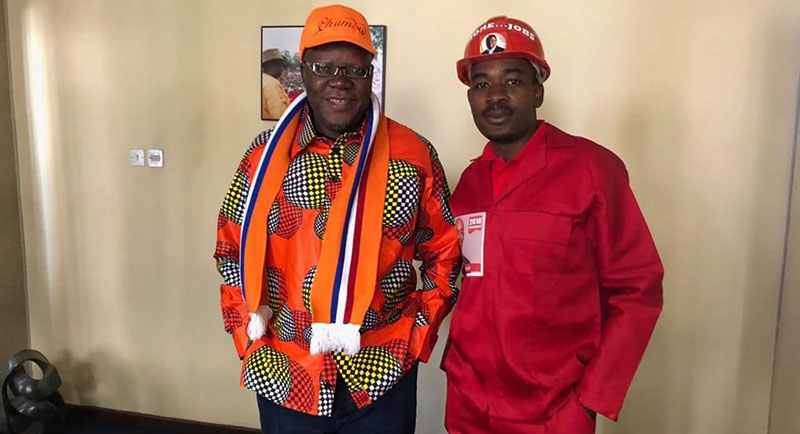 The Zimbabwe National Liberation War Veterans Association (ZNLWVA) has called for members of the opposition to remove Nelson Chamisa and Tendai Biti as leaders of the MDC Alliance. The former freedom fighters attacked the two saying they were in bed with former president Robert Mugabe. Addressing the media in Harare on Tuesday, ZNLWVA secretary-general Victor Matemadanda said,

Whilst we don’t want to interfere with internal affairs of MDC, we believe it’s up to the real MDC to stand up and reclaim their party from Biti and Chamisa. They are working with Grace and Robert Mugabe. It defies logic that on 18 November Chamisa was with us, condemning Mugabe. We removed Mugabe from them, we removed their monster but today the same MDC is going into bed with Mugabe. What does the real MDC say? What does the Dzamara family think of Chamisa? Mugabe is not supposed to be even alive, most of his age-mates are dead, I don’t know how Chamisa refers to him. His ancestor perhaps? He is now in bed with him.

Mugabe has become a saint and darling to Chamisa. That’s treachery. That’s why we say he should not get support from the real MDC. Those who voted Mwonzora against Chamisa for SG at their last Congress must now stand up and throw Chamisa into the political dustbin. We urge them to democratically elect a successor to Tsvangirai. Chamisa is now like his new found mentor, Robert Mugabe – violent and autocratic.

The former freedom fighters also attacked the United States during their press conference.

4 comments on “The Real MDC Must Reclaim Its Party From Chamisa And Biti, MDC Must Exist Without Them: War Veterans”

The Real MDC Must Reclaim Its Party From Chamisa And Biti, MDC Must Exist Without Them: War Veterans