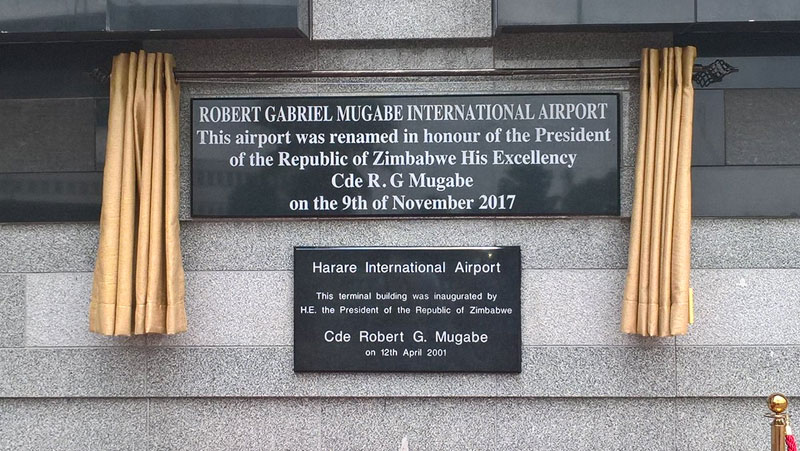 The Zimbabwe National Liberation War Veterans Association (ZNLWVA) has called for the renaming of the Robert Gabriel Mugabe International Airport after denouncing the former president as a traitor. The war veterans denounced Mugabe and his wife, former first lady Grace Mugabe for allegedly working with opposition leaders Nelson Chamisa and Tendai Biti to cause chaos in the country. The former freedom fighters said they would rather have the airport named after late hero Herbert Chitepo. Speaking at a press conference, ZNLWVA secretary-general Victor Matemadanda said

…Handing over petition so that Mugabe’s name is removed at the airport with immediate effect. He does not deserve such an honour as he has taken a betrayal stance…He has strayed and chose an unholy matrimony with MDC. Tomorrow we are going to Harare International Airport not Robert Mugabe to demand the removal of that name because Mugabe is a last-minute traitor. We want names of our heroes, not sellouts…The name Robert Gabriel Mugabe will be remembered for a leader who gave up his flock to raveners

The airport was renamed last November after then Zanu-PF youth secretary Kudzanai Chipanga threatened not to invite ministers to the 2018 edition of the 21st February Movement celebrations if the Airport was not renamed. A few weeks after the renaming ceremony Mugabe lost power after the Zimbabwe Defence Forces launched Operation Restore Legacy.

6 comments on “Mugabe Is A Sellout, His “Dirty Name” Must Be Removed From RGM International Airport – War Veterans”